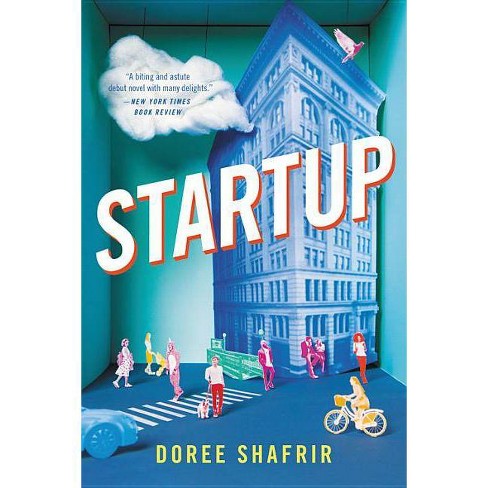 While Silicon Valley likes to think of itself as the epicenter of the tech universe, New York attracts its fair share of ambitious entrepreneurs determined to make their mark. Mack McAllister's trying to take his app to the next level; Isabel works for him a bit too closely; Katya's desperate for a scoop. Scandal erupts.

From veteran online journalist and BuzzFeed writer Doree Shafrir comes a hilarious debut novel that proves there are some dilemmas that no app can solve. Mack McAllister has a $600 million dollar idea. His mindfulness app, TakeOff, is already the hottest thing in tech and he's about to launch a new and improved version that promises to bring investors running and may turn his brainchild into a $1 billion dollar business -- in startup parlance, an elusive unicorn. Katya Pasternack is hungry for a scoop that will drive traffic. An ambitious young journalist at a gossipy tech blog, Katya knows that she needs more than another PR friendly puff piece to make her the go-to byline for industry news. Sabrina Choe Blum just wants to stay afloat. The exhausted mother of two and failed creative writer is trying to escape from her credit card debt and an inattentive husband-who also happens to be Katya's boss-as she rejoins a work force that has gotten younger, hipper, and much more computer literate since she's been away. Before the ink on Mack's latest round of funding is dry, an errant text message hints that he may be working a bit too closely for comfort with a young social media manager in his office. When Mack's bad behavior collides with Katya's search for a salacious post, Sabrina gets caught in the middle as TakeOff goes viral for all the wrong reasons. As the fallout from Mack's scandal engulfs the lower Manhattan office building where all three work, it's up to Katya and Sabrina to write the story the men in their lives would prefer remain untold. An assured, observant debut from the veteran online journalist Doree Shafrir, Startup is a sharp, hugely entertaining story of youth, ambition, love, money and technology's inability to hack human nature. "A biting and astute debut novel [with] many delights."-Lara Vapnyar, New York Times Book Review

Doree Shafrir is a senior culture writer at BuzzFeed News and has written for New York Magazine, Slate, The Awl, Rolling Stone, Wired, and other publications. A former resident of Brooklyn, she now lives in Los Angeles with her husband Matt Mira, a comedy writer and podcaster, and their dog Beau.
If the item details above aren’t accurate or complete, we want to know about it. Report incorrect product info.