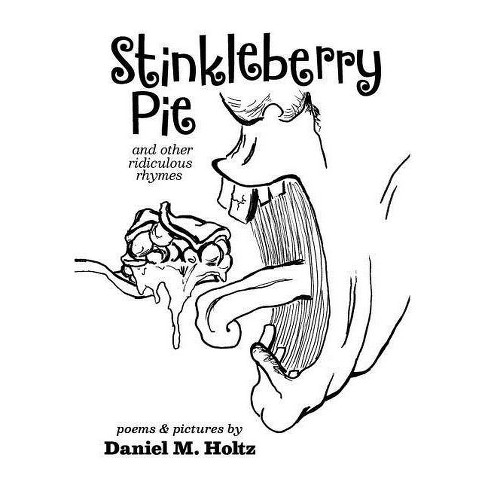 In his first book of poetry, Daniel M. Holtz careens carelessly from thoughtful to silly to gross and back again, creating a world of characters and ridiculous situations sure to entertain kids and parents alike. Get ready to meet The Humperdink Glumpus of Flattery Heights, Calimyrna Figgie Pie who kept her room like a piggy sty, the menu of Cafe Du Gross where nothing sounds very edible, giant spiders as Christmas trees, and of course a heaping helping of Stinkleberry Pie! The book is filled with hilariously strange illustrations by the author that enhance and expand the poems.

In an age where texting and messaging are the preferred form of communication for young people, vocabulary words are becoming an endangered species. Acting as a curator and conservationist, Daniel M. Holtz carefully drops a plethora of tricky words (in context) for curious young minds to consider. Don't be surprised if your child "precariously" slips the words "artfully evasive" into a conversation after a few reads of this book. You might have to look up a few words yourself!

Daniel M. Holtz has never before written a book, & wasn't really trying to write this one either. For several months, he was doodling & scrawling in a journal for his youngest kids who had just relocated 800 miles away. A nice lady sitting next to him on an airplane asked, "Are you writing a children's book?" To which Dan answered, "It appears that I am, thanks for noticing." Then, all of a sudden, droves of crazy ideas started pouring out of his brain straight through his right ear & onto the pages of this book! (yuck.)

Anyway, Dan currently lives on Lake Champlain in Vermont with his (beautiful & brilliant) wife, Katrina, his (faithfully canine) companion, Mr. B., and (though not often enough) his four children: Wilder, McCartney, Austin, and Hope. Dan is a serial entrepreneur who has appeared on NBC's Shark Tank. He can often be spotted wandering in the park across the street rhyming to himself and gesticulating wildly.