Stockhausen Serves Imperialism and Other Articles - by Cornelius Cardew (Paperback) 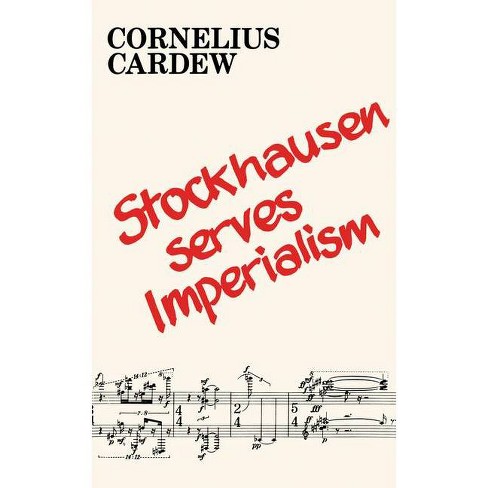 $20.00
new at target¬
no reviews yet
be the first!be the first! ratings
Shipping
Not available
Help us improve this page

A notorious, influential and radical critique of the avant-garde music of Stockhausen and Cage, by maverick composer Cornelius Cardew

Originally published in 1974, Stockhausen Serves Imperialism is a collection of essays by the English avant-garde composer Cornelius Cardew that provides a Marxist and class critique of two of the more revered composers of the postwar era: Karlheinz Stockhausen and John Cage.

A former assistant to Stockhausen and an early champion of Cage, Cardew provides a cutting rebuke of the composers, their work and their ideological positions (Cage's staged anarchism and Stockhausen's theatrical mysticism, in particular). Cardew considers the role of these composers and their works within the development of the 20th-century avant-garde, which he saw as reinforcing an imperialist order rather than spotlighting the struggles of the working class or spurring revolution against bourgeois oppression. Cardew's early works do not escape his own scrutiny, with the book containing critiques and repudiations of his canonical works from the 1960s and early 1970s: Treatise and The Great Learning. After abandoning the avant-garde, Cardew devoted his work to the people's struggle, creating music in service of his radical politics. This music mostly took the form of class-conscious arrangements of folk songs and melodic piano works with such titles as "Revolution is the Main Trend" and "Smash the Social Contract." Cardew maintained a critical cultural stance throughout his life, later going on to denounce David Bowie and punk rock as fascist. He was killed by a hit-and-run driver in 1981--a death that some speculate could have been an assassination by the English government's MI5. Supplementing Cardew's writings are two essays by his Scratch Orchestra collaborators Rod Eley and John Tilbury.
If the item details above aren’t accurate or complete, we want to know about it. Report incorrect product info.