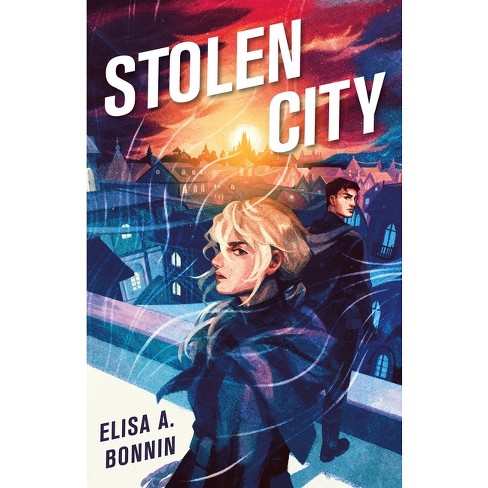 Twin thieves attempt to pull off a daring heist in Stolen City, the sophomore fantasy novel from Dauntless author Elisa A. Bonnin.

The city of Leithon is under Imperial occupation and Arian Athensor has made it her playground. In stealing magical artifacts for the Resistance, bounding over rooftops to evade Imperial soldiers, and establishing herself as the darling thief of the underground, Arian lives a life wrapped in danger and trained towards survival. She'll steal anything for the right price, and if she runs fast enough, she can almost escape the fact that her mother is dead, her father is missing, and her brother, Liam, is tamping down a wealth of power in a city that has outlawed magic. But then the mysterious Cavar comes to town with a job for the twins: to steal an artifact capable of ripping the souls from the living--the same artifact that used to hang around the neck of Arian's mother. Suddenly, her past is no longer buried under adrenaline but intimately tied to the mission at hand, and Arian must face her guilt and pain head-on in order to pull off the heist. As Arian and Cavar infiltrate the strongest fortress in Leithon and Liam joins the Resistance as their resident mage, the twins find themselves embroiled in court politics and family secrets, and the mission becomes more than just another artifact theft. The target is now the Imperial rule, and Arian will go to any length necessary to steal her city back.

"Stolen City is a thrilling fantasy full of twists and surprises. A page turner for those who love magic, intrigue and revolution!" --Judy I. Lin, New York Times-bestselling author of A Magic Steeped in Poison The discussion of the past, occupation, and societal roles bind the characters together and lead to a satisfying climax. Cinematic action and an entertaining caper. --Kirkus An action-packed and immersive fantasy that'll have you on the edge of your seat. --Alechia Dow, author of The Sound of Stars and The Kindred "The plot is great fun: part political intrigue, part coming of age, part adventure. The characters are rounded and real, each with their own journey to make over the course of the book." --A.F.E. Smith, Swoon reader "The writing is polished and the characters well rounded. I can't wait to read more!" --ashlaster, Swoon reader

Dauntless: Dauntless captures the best parts of every action-packed fantasy--breathtaking scenes of power and victory that push the limits of human tenacity. This is a triumphant tale of courage and self discovery that will make you believe in your own strength. --Kyllie Lee Baker, author of The Keeper of Night An amazing read, full of non-stop action and breathless moments. Spending time with these characters was a delight! --K.S. Villoso, author of The Wolf of Oren-Yaro

Elisa A. Bonnin was born and raised in the Philippines, after which she moved to the United States to study chemistry and later oceanography. After completing her doctorate, she moved to Germany to work as a postdoctoral scientist. A lifelong learner, Elisa is always convinced that she should "maybe take a class in something" and as a result, has amassed an eclectic collection of hobbies. But writing will always be her true love. Publishing a book has been her dream since she was eight years old, and she is thrilled to finally be able to share her stories. She is the author of Dauntless and Stolen City.
If the item details above aren’t accurate or complete, we want to know about it. Report incorrect product info.