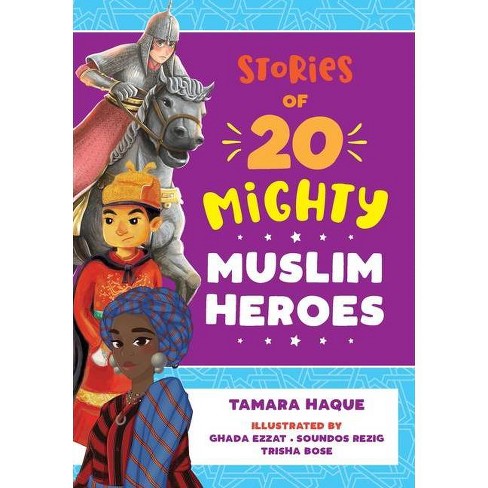 Read about 20 Muslim heroes who made a big difference to the world. Travel back in time with true stories of these inspirational heroes, accompanied by colourful illustrations and real images bringing the stories to life.﻿﻿﻿

Changing misconceptions one hero at a time. This much needed children's book empowers children with stories of 20 famous and little known Muslim heroes who were trailblazers.

Do you know the story of the female founder of the oldest running university? You know Newton and Einstein but have you heard of Ibn Sina and Lubna of Cordoba? Did you hear of the female navy commander who defeated the Dutch army...twice! You will be surprised to know they were all Muslim!

These are just some examples of thousands of courageous Muslim women and men throughout history whose beliefs and accomplishments helped change the world for future generations. They are trailblazers who opened the doors to education, made remarkable discoveries, fought for women's rights, led powerful armies, and believed in their dreams.

- change misconceptions one hero at a time.

Stories of 20 Mighty Muslim Heroes hopes to inspire and empower children with these legendary multicultural biographies.

If your child enjoyed Little Leaders, Amazing Muslims Who Changed the World, and Goodnight stories for Rebel Girls(R), then they will love Stories of 20 Mighty Muslims Heroes.

Help change misconceptions one hero at a time by clicking the BUY NOW button today.

A portion of book profits is donated to Human Appeal Australia (a registered British charity) that serves underprivileged communities around the world.