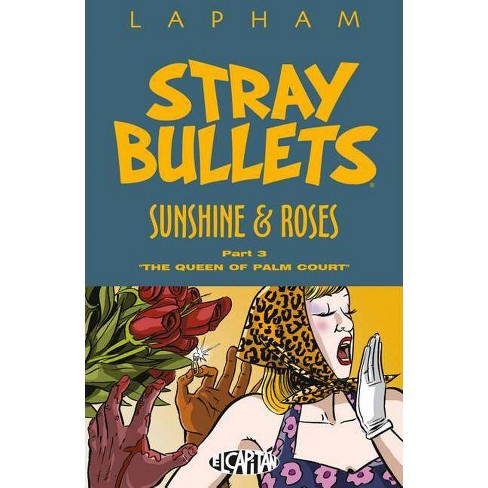 "The chapters in this book were originally published as issues #17-24 of the comic book STRAY BULLETS: SUNSHINE & ROSES."--Title page verso.

The getaway is always trickiest part of any heist. It gets even trickier when the one place you go to hide and the one person you're counting on hiding you is just about the worst place and worst person you could have ever picked. Is it self-sabotage or a secret plan of revenge?....Sunshine and Roses tells the story of a boy and a girl, how they fell in love, and hatched a scheme to blow up the Baltimore underworld. There is no crime book remotely like STRAY BULLETS and with Sunshine & Roses, the uncompromising, EISNER AWARD WINNING team of DAVID AND MARIA LAPHAM craft a heist story like you never seen.
Collects STRAY BULLETS: SUNSHINE & ROSES #17-24

LIBRARY JOURNAL (STARRED) -- Annie tells everyone she's 26, but she's actually in her late 30s. She lives in the suburbs with her doting husband and two small children, all of whom she despises. Small-town life and a middle-class income is stifling, which is why she doesn't get too upset when a shopping mall security guard who catches her shoplifting recruits her to start dealing marijuana on his behalf. But Annie's got bigger, darker secrets than anyone could know. One is her ex, a vicious criminal named Paulo, and the other is her firstborn daughter, a young woman named Beth who, along with her friends, just stole a fortune from a dangerous mob boss and is hoping Annie's house might be a good place to lay low. What follows is violent, tragic, hilarious, shocking, and totally par the course for Lapham (Stray Bullets: Sunshine & Roses, Vol. 2), one of comics' best and most consistent creators.
VERDICT This is the latest in a series Lapham has produced on and off since 1995, and part of his brilliance as a storyteller is that every volume works as a great jumping-on point. So if you haven't already jumped on, you really should.
If the item details above aren’t accurate or complete, we want to know about it. Report incorrect product info.