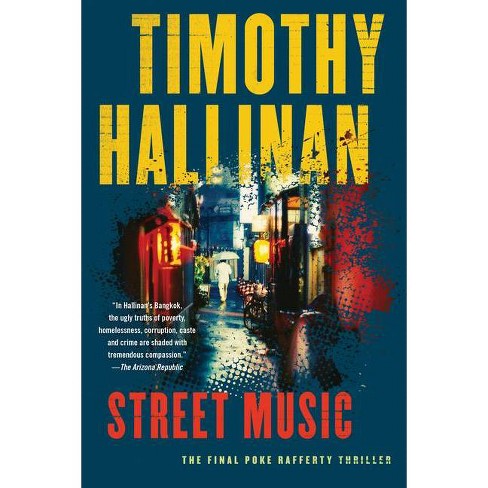 "Poke Rafferty's hand-made intercultural family is disrupted in unexpectedly complicated ways by the birth of his son, littering their small Bangkok apartment with emotional land mines. At the same time, the most cantankerous member of the small gang of Old Bangkok Hands who hang out at The Expat Bar suddenly goes missing under suspicious circumstances. Engaged in the search for the missing American and the challenges of life with a newborn, Rafferty misses the fact that he's being followed by someone who puts his whole life in Thailand at risk"--

Eight years ago, Poke Rafferty, an American travel writer, and his Thai wife, Rose, adopted a Bangkok street child named Miaow, forming an unconventional intercultural family. That family has weathered extreme challenges--each of its three members carried the scars of a painful and dangerous history--but has stuck together with tenacity and love (and a little help from some friends). Now that family is in jeopardy: the birth of Poke and Rose's newborn son has littered their small apartment with emotional land mines, forcing Poke to question his identity as a dad and Miaow to question her identity as a daughter. At the same time, the most cantankerous member of the small gang of Old Bangkok Hands who hang out at the Expat Bar suddenly goes missing under suspicious circumstances. Engaged in the search for the missing American, Poke is caught completely off-guard when someone he thought was gone forever resurfaces--and she has the power to tear the Raffertys apart.

A CrimeReads Most Anticipated Novel of May Praise for Street Music
Anyone who has enjoyed a Poke Rafferty novel over the years knows that family life is at the very heart of Hallinan's work and the complex dynamics between Poke, Rose, and Miaow are the true, beautiful mystery at work . . . It's [Street Muisc] the typically dizzying, satisfying mixture from Hallinan, whose novels are reliably nuanced and compelling.
--CrimeReads

Praise for the Poke Rafferty Thrillers "You could drown in the waves of corruption that surge through Timothy Hallinan's Bangkok mysteries."
--The New York Times Book Review "Absorbing . . . Poke proves up to correcting the wrongs he sets out to right."
--The Wall Street Journal "A fast-paced, compelling tale, but also, on every level, a fine literary read. [Hallinan's] characters are fully drawn, his Bangkok beautifully evoked, his understanding of the complexities of the human condition so obvious and so full of compassion."
--William Kent Krueger, Edgar Award-winning author of Ordinary Grace "A bravura performance . . . that never loses the rhythm of its characters' beating hearts."
--Booklist, Starred Review

Timothy Hallinan has been nominated for the Edgar, Nero, Shamus, Macavity and Silver Dagger awards. He is the author of twenty widely praised books, including the Simeon Grist Los Angeles mysteries, the Poke Rafferty Bangkok thrillers and the Junior Bender Hollywood burglar novels, including Herbie's Game, winner of the Lefty Award for Best Humorous Mystery. After years of working in the television and music industries, he now writes full-time. He lives in California and Thailand.
If the item details above aren’t accurate or complete, we want to know about it. Report incorrect product info.