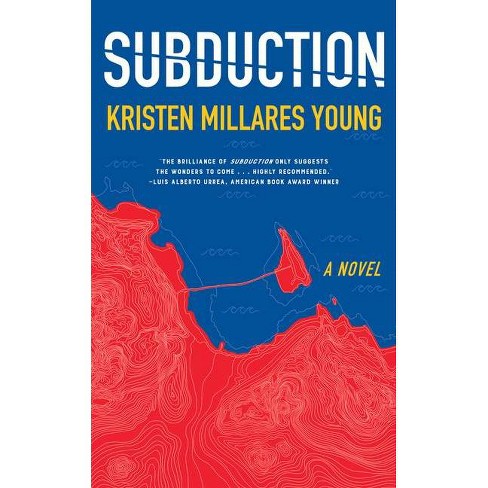 $16.95
new at target¬
no reviews yet
be the first!be the first! ratings
Release Date: coming soon!
Preorder for
Edit zip
Ships by release date with free standard shipping using RedCard
Help us improve this page

With dreamlike, salt-water-laced prose that feels born of the Salish Sea, Kristen Millares Young's Subduction lyrically examines relationships strained and forged by place and belonging. Intelligently addressing womanhood, community, lust, and loss, this is a novel as deep as it is intoxicating, as intricate as it is powerful. Like Marilynne Robinson's Housekeeping, Subduction is a novel to be celebrated for both its poetry and wisdom.
--Sharma Shields, author of The Cassandra

Kristen Millares Young's Subduction is the powerful debut novel from a writer that comes to us fully formed. This book is as unforgettable as it is timely, a story that keeps us riveted from beginning to end, written with abundant grace and lyric intensity. Beautiful, smart, and urgent. Read this book now.
--Robert Lopez, author of Good People, Kamby Bolongo Mean River, Part of the World, All Back Full, and Asunder

Kristen Millares Young's Subduction is a taut, atmospheric tale that gave me what I hope for in a novel: characters that I can care about, in a place that seems real, with stakes that really matter. This is an enormously impressive debut. I'll eagerly await more from this writer.
--Steve Yarbrough: PEN/Faulkner finalist, winner of a Richard Wright Award and a California Book Award. The Unmade World, The Realm of Last Chances, The End of California, Prisoners of War.

Subduction will give you a sense of life lived in the most remote corner of the lower 48, the Makah reservation in Washington State. The ever-changing Pacific Ocean, the emerald forests, the geoduck clams, and the scruffy sea-scoured dwellings are merely the foundation of Kristen Millares Young's suspenseful, atmospheric first novel. The characters leap off the page and into your heart. I wanted to swallow the story whole, and I was happy to know it would take time to savor it. An auspicious debut!
--Patricia Henley, National Book Award finalist, Hummingbird House, In the River Sweet, and Other Heartbreaks

"Love is a kind of home," Kristen Millares Young writes in Subduction. But in the world of this beautifully written novel, home is also a place of secrets, murder, and loss. A tale of taking and giving, resistance and surrender, Subduction raises troubling, provocative questions about our struggle to belong.
--Samuel Ligon, Miller Cane, Among the Dead and Dreaming, Safe in Heaven Dead

Set in the Pacific Northwest, Subduction is a lyrical forest of storytelling rooted in indigenous voices and invaded by those who would steal the tongues and hearts of the ones they love while bartering and betraying the idea of belonging to a land, a birthright, and a family. When you read Kristen Millares Young's words, you understand how it is we can steal, can betray, can love.
--Shawn Wong, Homebase and American Knees

Subduction introduces a welcome new voice in Kristen Millares Young, here telling a taut, fraught story of two people who meet and engage in circumstances that surprise. Both have lived but are seeking to live yet more fully, even as they're beset by their pasts. Whether the way to such realization is with the other is a core part of this vividly written story. Set on Makah Nation land, part of Washington's Olympic Peninsula, Subduction is a searching exploration of historic legacies in the present day. The result: a book of reckoning, full-heartedly told.
--Rick Simonson, Elliott Bay Book Company