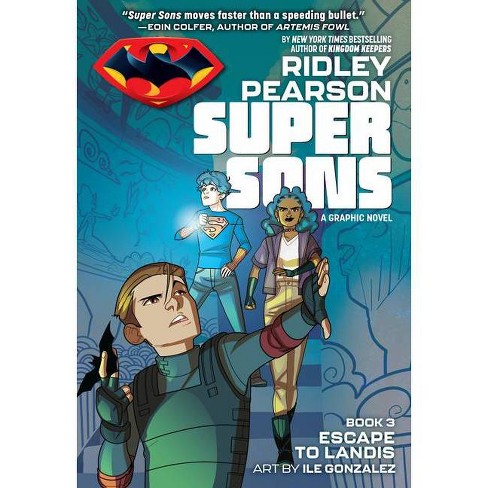 "The conclusion of the ... adventure that began in The polarshield project"--Back cover.

Finishing the thrilling adventure that began in The PolarShield Project, a mysterious new foe plans to release a deadly virus, launching the sons of the world's two greatest superheroes on their biggest mission yet! In the aftermath of the PolarShield Project, Jon Kent and Damian Ian Wayne are on the run! With their hometown in ruins and in the absence of their heroic fathers, Jon and Ian are on a mission to find a sample of the deadly virus that's threatening Wyndemere and Jon's mother, Lois Lane. Meanwhile, Candace follows clues that hold the key to her destiny as she unlocks powerful abilities she never knew existed. While their quests threaten to divide the three of them, it's only through teamwork and trust that they can succeed. Join New York Times bestselling author Ridley Pearson (Kingdom Keepers) and artist Ile Gonzalez as they introduce new settings, new allies and villains, and an all-new adventure in this latest action-packed chapter!

Ridley Pearson is the bestselling co-author (with Dave Barry) of Peter and the Starcatchers, Peter and the Shadow Thieves, Peter and the Secret of Rundoon, Escape from Carnivale, Cave of the Dark Wind, Blood Tide, and Science Fair. He is also the author of 18 novels, including the internationally bestselling series Kingdom Keepers, Cut and Run, and The Middle of Nowhere. The stage adaptation of Peter and the Starcatchers earned the most Tony nominations (9) of any play in history. Ile Gonzalez illustrated her first comic strip while in kindergarten, and grew up to study fashion design in college. Deciding that graphic storytelling was her first true love, she refocused her creative efforts and landed her first paid work at the digital storytelling company Madefire, working exclusively for them to co-create their popular middle grade series The Heroes Club. Super Sons is her first graphic novel and her first project for DC.
If the item details above aren’t accurate or complete, we want to know about it.

Lock and Key: The Initiation - by Ridley Pearson