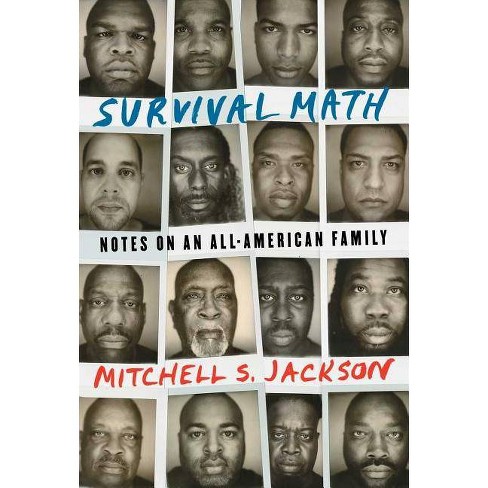 ONE OF TIME'S 100 BEST BOOKS OF THE YEAR
ONE OF NPR'S BEST BOOKS OF 2019
ONE OF BUZZFEED'S BEST BOOKS OF 2019 An electrifying, dazzlingly written reckoning and an essential addition to the national conversation about race and class, Survival Math takes its name from the calculations award-winning author Mitchell S. Jackson made to survive the Portland, Oregon of his youth. This dynamic book explores gangs and guns, near-death experiences, sex work, masculinity, composite fathers, the concept of "hustle," and the destructive power of addiction--all framed within the story of Jackson, his family, and his community. Lauded for its breathtaking pace, its tender portrayals, its stark candor, and its luminous style, Survival Math reveals on every page the searching intellect and originality of its author. The primary narrative, focused on understanding the antecedents of Jackson's family's experience, is complemented by poems composed from historical American documents as well as survivor files, which feature photographs and riveting short narratives of several of Jackson's male relatives. The sum of Survival Math's parts is a highly original whole, one that reflects on the exigencies--over generations--that have shaped the lives of so many disenfranchised Americans. As essential as it is beautiful, as real as it is artful, Mitchell S. Jackson's nonfiction debut is a singular achievement, not to be missed.

"This is more than Jackson's story, and as he traces his great-grandparents' exodus from Alabama to Portland and the subsequent lives of his relatives...he captures the cyclical nature of poverty and neglect...The prose is a stunning mix of internal monologue and historical and religious references that he incorporates to tell his story...Thanks to Jackson's fresh voice, this powerful autobiography shines an important light on the generational problems of America's oft-forgotten urban communities."
--Publishers Weekly, starred "A dynamic, impressive debut memoir from the Whiting Award-winning author of The Residue Years (2013)... A potent book that revels in the author's truthful experiences while maintaining the jagged-grain, keeping-it-a-100, natural storytelling that made The Residue Years a modern must-read."
--Kirkus Reviews, starred "Award-winning novelist Jackson reclaims his history through an elegant memoir...one of rigorous self-examination, approaching his personal story with honesty and poetry...The result is an intimate portrayal of what makes us human...as much about a writer struggling to understand life's jubilations, mistakes, and losses, as it is a chronicle of a black man's place in America, appealing to fans of Kiese Laymon and Ta-Nehisi Coates."
--Library Journal, starred "In the second-person vignettes scattered throughout Jackson's latest work, close-call scenarios threaten both the lives and freedom of Jackson's family members. After escaping death or incarceration, their frequent refrain is, 'Praise God!' Yet the sense one gets reading this portrait of an African American family is that, for many black Americans, livelihood rests on blind chance more than divine intervention ... Product-of-my-environment stories are common; beyond his candid self-portrayal as a willing-but-reluctant participant, what makes Jackson's take on this theme so compelling is his inquisitive and unflinching investigation of the conditions that shaped him."
--Booklist, starred

"Beyond his own past, Jackson juxtaposes his history with those of his male relatives to illustrate the hardships of class and race on a generational level, creating a timely narrative centered around what it takes to survive in America."
--Time, 11 New Books to Read this March "Jackson, the author of the novel The Residue Years, writes about his own childhood in Portland, Ore., and the entrenched racism and economic inequality that shaped his community. Along the way, he interweaves poems and narratives from members of his family. As Jackson puts it in his author's note, "Our stories of survival are inseparable from the ever-fraught history of America.""
--New York Times, 12 New Books to Watch for in March "Jackson revisits his early years in a black Portland neighborhood, telling the stories of his struggling family members and analyzing the marginalizing cultural forces around them."
--Entertaintment Weekly, 20 new books to read in March "Vivid and unflinching ... Mitchell's memoir in essays chronicles the struggles of friends and family with drugs, racism, violence, and hopelessness and puts a face on the cyclical nature of poverty."
--Boston Globe, Most Anticipated Books of 2019 "An extensive and illuminating look at the city of [Jackson's] childhood, exploring issues like sex, violence, addiction, community, and the toll this takes on a person's life.
--Buzzfeed, Most Anticipated Books of 2019
If the item details above aren’t accurate or complete, we want to know about it.

Everything You Need to Ace Math in One Big Fat Notebook : The Complete Middle School Study Guide - by Ouida Newton (Paperback)

The Reason I Jump - by Naoki Higashida