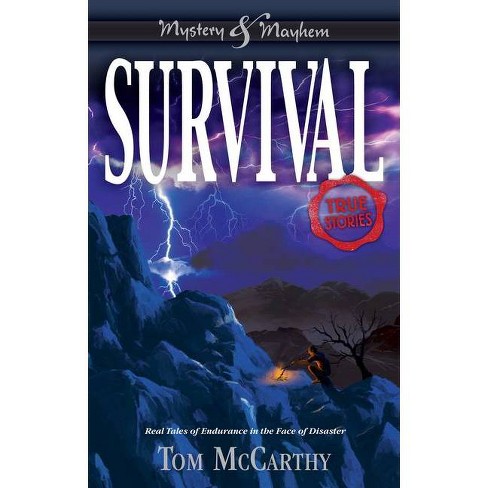 Praise for Survival: Real Tales of Endurance in the Face of Disaster Geekdad.com "Nomad Press has a TON of history-themed books, and my son and I are going through the online list to identify some new titles after he recently finished two of them. The first book he tackled was Survival: True Stories, a 124-page paperback that provided amazing details on five different tales of survival. The first survival story is about Captain Ernest Shackleton and his men and their incredible tale of survival after their ship, Endurance, got trapped in the ice of the Antarctic coast. Next, the tale of Captain Bligh and a small group of men dropped into a boat after the crew of the Bounty mutinied is told. The story of William Lewis Manly's trek across Death Valley after leaving Salt Lake City is followed by Charlotte Picard's story of survival after the Medusa shipwrecked in 1816. Finishing up the book's five tales is the story of George Donner and the men, women, and children who chose to follow him in 1846 and their battle to survive against the elements and hunger. Each of the five tales provides a close-up map of the journey and a thumbnail map that shows the story's location with respect to the continents. The chapters are not sensational in any way... each tale is told clearly and fairly, with nice summaries that should help with the "what happened to them?" questions. Finally, each chapter closes with a "What Else Is Going on In [Year]?" to provide readers with some additional facts that could possibly spur more reading on a particular time in history." Booklist ". . . the conversational tone, hair-raising anecdotes, and fairly comprehensive glossary make this a handy primer for any budding thrill seeker." This Kid Reviews Books, October 3, 2016 Blog ". . . The stories are all true, and kids will enjoy reading about them. They learn a little bit of history, and they may not even realize it. . . Altogether a really neat book. I give the book five out of five bookworms!" Night Owls Reviews " Readers nine years of age and older will enjoy this selection of short survival stories about individuals who encountered various obstacles, both natural and manmade, that made their explorations and real life adventures exciting and exceedingly dangerous. . . Large print and a highly readable narrative make this a book that will appeal to even reluctant readers who may not usually gravitate to stories like these. A second book in the series, "Pirates and Shipwrecks" is also available if the youngster enjoys "Survival" so much he or she wishes to try another volume of true adventure stories." Bookloons Blog "Nice selection of true life survival adventures. Each one comes with a map that highlights important areas that are discussed in the selection. Large print and a flowing narrative make this a kid-friendly book and one that will work well with reluctant readers. Every school library should have a copy of this book!" Always in The Middle Blog ". . . It's a gripping and honest portrayal of what life must have been like in the face of death when technology or close-by help was absent. You may recognize a few of the names like Donner, Shackleton, or Bligh but their stories delve deeper into the times and reasons why they got themselves in such dire straights. . . " Compass Book Ratings 4/5 stars ". . . The survival stories of these men and women (yes, 2 out of the 5 stories are about women) are not only ones of adventure, but stories of bravery, daring, ingenuity and leadership, which ultimately lead to the survival of a doomed crew or company. . . Mystery and Mayhem: Survival is a quick, exciting read that will whet the appetite of any young reader with the thirst for adventure and bravery." Mother Daughter Book Club "The Mystery and Mayhem series does a great job of finding bits about people from history and turning them into page-turners for the younger set. Survival: True Stories by Tom McCarthy is another in the series sure to appeal to readers aged 9 to 12." Mom Read It Blog "Five stories of survival against all odds. . . . Five stories, all terrifying, and all true."

Titles Edited by Tom McCarthy Far Afield, A Sportswriting Odyssey by S.L. Price
The New York Times
"The sports reportage in this gracefully written book is strong enough to make the sometimes-dated events seem timeless." Esquire Magazine
"Far Afield is mostly a journey of self-discovery, honest and true without any of the usual sun-dappled barf. It reminds us that sports can tell us more about one another than just about anything else we do, so long as someone as able as Price provides the translation." Duty, Honor, Victory by Gary Bloomfield
Sports Illustrated
"An excellent book, it could be sent to school with your kids and used for social studies classes." Publishers Weekly
"A touching and memorable account of America's athletes on the battlefield." Facing Ali: 15 Fighters/15 Stories by Stephen Brunt
Sports Illustrated
"These are men of substance, worth getting to know. Brunt does them justice, but the author has done something even more impressive: He has found something new to report about Muhammad Ali." Racing the Sunset: An Athlete's Quest for Life After Sports by Scott Tinley
Triathlete
"Tinley rubbed shoulders with legends from all sports during the run-up in his own notoriety, and leveraged those relationships in writing his latest book. He opens their grief to us in their own words, and bares his own heart as well." Undertaker's Son by Richard "Digger" Phelps
Donald J. Trump
"Digger is not only a survivor, he's an optimist who has made an indelible impression on everyone who has been lucky enough to know him. His book is a lesson in having the right attitude to not only overcome obstacles, but to contribute to society and our country in a big way. Undertaker's Son is a terrific read, and a wonderful book to add to any collection." Foul Ball: My Life and Hard Times Trying to Save an Old Ballpark by Jim Bouton
San Francisco Chronicle
"An irresistible story whose outcome remains in doubt until the very end. Not just a funny book, but a patriotic one." John Feinstein
"What it shares with Ball Four is Bouton's humor, his keen sense of what's right and wrong, and a remarkable tale that--if you didn't trust the author--you would find difficult to believe." Jim Bouton
"Ball Four is a book I wanted to write. Foul Ball is a book I had to write." Keith Olbermann
"Now in his fifth decade of telling the truth no matter the consequences, Bouton proves that a badly run city government can be just as dangerous--and just as hilarious--as a badly run baseball team." Other titles from Nomad Press
Explorers of the New World
School Library Journal
"This informative, entertaining activity book takes readers on a fascinating voyage of their own . . . . An appealing and useful resource." Children's Literature Review
This combination history and activity book from the "Build it Yourself" series will enliven home school and classroom history units. . . ." The American Revolution: Experience the Battle for Independence
School Library Journal
"Featuring a lively page design, this volume asks readers a series of questions to prompt them to consider the American Revolution . . . . VERDICT A useful resource; purchase as needed."
If the item details above aren’t accurate or complete, we want to know about it. Report incorrect product info.