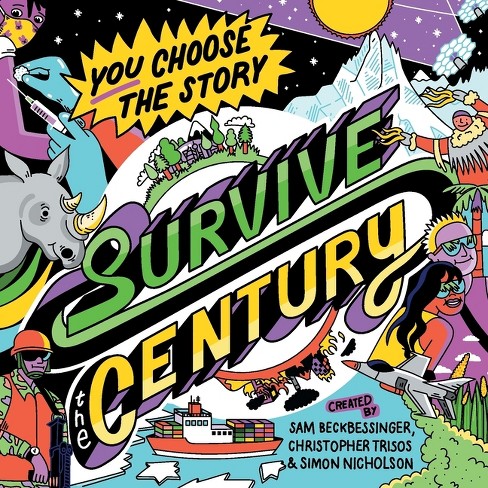 A funny, hopeful, science-informed interactive story about the future, where you choose how humans respond to the ravages of climate change up to 2100.

Survive the Century is an interactive story that positions you as the senior editor of the world's most popular and trusted news organization. You have the enviable power to set the news agenda and figure out how the world should respond to climate change. What if you invest in green technology and cut taxes? What if you rewild half of the world's agricultural land? What if you unleash your inner supervillain and spark WWIII? What if you block out the sun (just a little bit)?

Along the way, you get to read the headlines of the newspapers of the day that result from your choices, and read news stories from the future written by leading sci-fi writers like Lauren Beukes, Rajat Chaudhuri, Maria Turtschaninoff and Sophia Al-Maria. The book also features playful illustrations by Annika Brandow.

This story is a work of fiction, but it is informed by real science. Each pathway in the game has been co-developed by fiction writers with natural and social scientists and climate policymakers. The story aims to be whimsical and entertaining while still illustrating the real consequences and choices that are likely to confront us in the coming century. The online version of the story was launched in 2021, has already been read over 20,000 times, and was featured in publications like New Scientist, Gizmodo and Stories for Earth.

It's designed to be an ideal gift for teens and young adults who are passionate about climate change, a coffee-table conversation starter for older adults looking for more hopeful climate fiction, and an engaging tool for educational contexts.

"A climate fiction game where your choices on what narratives are highlighted will determine how well humanity will survive the 21st century." - Fridays for Future
"A journey through the forking paths of policy choice and consequent scenarios juiced up with hilarious, satirical and irreverent stories." - Rajat Chaudhuri, Telegraph India
"Although the scenarios players encounter in the game are fictional - developed by a group of science-fiction writers - the creators collaborated with scientists to ensure the trajectories were possible within the bounds of time and warming." - Katelyn Weisbrod, Inside Climate News
"For those who feel despondent and like it's too late for us to do anything, go play Survive the Century and see that there are actually options." - Tamara Oberholster, independent journalist
If the item details above aren’t accurate or complete, we want to know about it. Report incorrect product info.