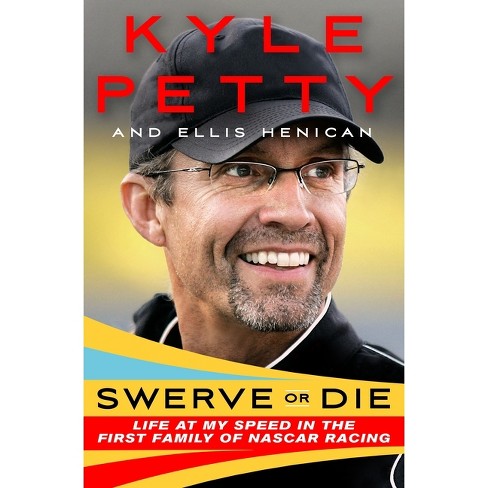 "Kyle Petty, a third generation racer, current NASCAR commentator, and one of the most beloved figures in the sport, takes readers deep into the heart of the NASCAR he knows. Through deeply personal stories from his racing career, and that of his father and grandfather, he talks about the biggest stars, the most exciting races and, especially the tough, defining issues the sport has had to face. ... He also lays out his vision for NASCAR's future, and discusses in clear and simple terms how the sport can bring in new people without driving away old ones"--

Stock-car racing star, country singer, and sports broadcaster Kyle Petty shares his familial legacy, intertwined with NASCAR's founding and history, in Swerve or Die--written with Pulitzer Prize-winner Ellis Henican, the New York Times bestselling coauthor of In the Blink of an Eye.

"Born into racing royalty. The only son of NASCAR's winningest driver ever. The grandson of one of the sport's true pioneers. The nephew of our very first Hall of Fame engine builder. It's quite a family to represent, and through it all, I've somehow managed to keep being Kyle." Kyle Petty won his very first stock-car race, the Daytona ARCA 200, in 1979 when he was eighteen. Hailed as a third-generation professional NASCAR racer, he became an instant celebrity in circles he had been around all his young life. Despite being the grandson and son of racing champions Lee Petty and Richard Petty, Kyle didn't inherit innate talent. Working in his family's North Carolina race shop from an early age, he learned all about car mechanics and maintenance long before he got behind the wheel. And although Kyle continued the family business, driving "Petty blue" colored cars emblazoned with his grandfather's #42--a number once used by Marty Robbins--his career took a different route than his forebears'. In Swerve or Die: Life at My Speed in the First Family of NASCAR Racing, Kyle chronicles his life on and off the racetrack, presenting his insider's perspective of growing up throughout the sport's popular rise in American culture. In between driving and running Petty Enterprises for thirty years, Kyle took some detours into country music, voiced Cal Weathers in Pixar's Cars 3, and started his annual motorcycle Kyle Petty Charity Ride Across America. And when his nineteen-year-old son Adam, a fourth-generation racing Petty, tragically lost his life on the track, Kyle founded Victory Junction, a camp for children with chronic and serious medical conditions in Adam's name--with help from Academy Award-winning actor and motorsports enthusiast Paul Newman. Filled with NASCAR history, stories of his family's careers, and anecdotes about some of stock-car racing's most famous drivers, Kyle's memoir also tackles the sport's evolution, discussing how welcoming diverse racers, improving car and track safety features, and integrating green technology will benefit NASCAR's competitors and fans in the future. Includes Photographs

After all the things Kyle's done, I knew there had to be a book in there somewhere. Well, here it is. And I'll tell you what: Kyle doesn't believe in keeping secrets. Even I learned some things in here. And yeah, his mom deserves all the credit for how he turned out. -- Richard Petty He's lived through the worst possible scenario that could happen to anyone. Imagine going back to Loudon after that! You could throw haymakers at Kyle. He just rolls with it. He's like, 'I'm gonna walk around with a ponytail...I'm gonna sing...I'm gonna say whatever I wanna say on TV.' With that upbeat attitude of his and the way he grabs every opportunity, I do think Kyle has lived the lives of five people combined.
-- Joey Logano For a guy that could be a prick because of who he is, he is just the greatest, most down-to-earth person I've ever met. Just like his dad. You gotta read Kyle's book. You gotta.
-- Ric Flair "As a competitor, broadcaster, family member and dear friend, Kyle has lived through every era of our sport, impacting the lives of so many along the way. With a heartfelt gift for storytelling, his love for NASCAR and passion for the people in it make his first-hand account of motorsports history a must-read for racing fans everywhere."
--Lesa Kennedy, executive vice chair of NASCAR

KYLE PETTY is a former American stock-car racer and current racing commentator on NBC Sports. He is the son of racing icon Richard Petty, the grandson of NASCAR pioneer Lee Petty and the father of rising racer Adam Petty, who was killed in a crash in May 2000. Outside of the sport, he is a musician, philanthropist, motivational speaker and TV host.

ELLIS HENICAN is a Pulitzer Prize-winning journalist, a popular TV pundit, and a multi-New York Times bestselling author.
If the item details above aren’t accurate or complete, we want to know about it. Report incorrect product info.