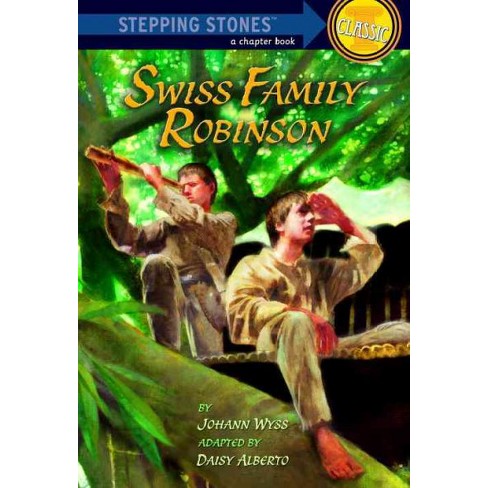 For six days and nights, a storm tosses the Robinson family's ship around on the sea, before dashing it on the rocks off a deserted island. All the sailors are gone. The family is alone! But nothing can keep the cheerful Swiss family Robinson down for long. Father and Mother Robinson, along with their four irrepressible boys, quickly settle into their new home--mining the shipwreck for supplies, discovering valuable resources on the island and animal friends, and even turning the treetops into their own lofty aerie. Life is a nonstop adventure with the Swiss Family Robinson! Johann Wyss's classic survival story is available for the first time ever as a Stepping Stones in this early chapter book filled with exciting black-and-white illustrations.

Johann David Wyss (1743-1818) was a clergyman in Bern, Switzerland. A former military chaplain, Wyss spoke four languages, loved nature, and was deeply involved in the raising of his four boys, reading to them and taking them on hikes and hunting trips. To teach them moral lessons and to entertain them, he read them a story he had written about a family just like theirs (each boy in the story is based on one of Wyss's four sons), who had been shipwrecked on a tropical island. This handwritten manuscript was more than 800 pages long, and one of his sons, Johann Emmanuel, helped him illustrate it. Years later another son, Johann Rudolf, by then a professor at the Berne Academy, found his father's manuscript, edited it, and published it in 1812-13 as The Swiss Family Robinson. The first English translation appeared in 1814, and there have since been nearly 200 versions of this novel, as well as two films and a television movie. Daisy Alberto is a children's book author who has written a number of Step into Reading and Stepping Stones titles, including A Horse and a Hero, Swiss Family Robinson, and Barbie as the Island Princess. Robert Hunt is an award-winning artist and illustrator. After receiving a master's degree in illustration from the Academy of Art University in San Francisco, he created a vast portfolio that includes editorial illustrations for many major publications, hundreds of book covers, and advertising campaigns. His notable projects include creating the DreamWorks logo and motion logos and documentaries on the Bay Bridge earthquake reconstruction and the Tour de France. Among his many awards, Hunt received the prestigious Hamilton King Award from the Society of Illustrators in 2015. He also teaches teaches illustration, professional practice, and painting at the California College of the Arts.
If the item details above aren’t accurate or complete, we want to know about it. Report incorrect product info.