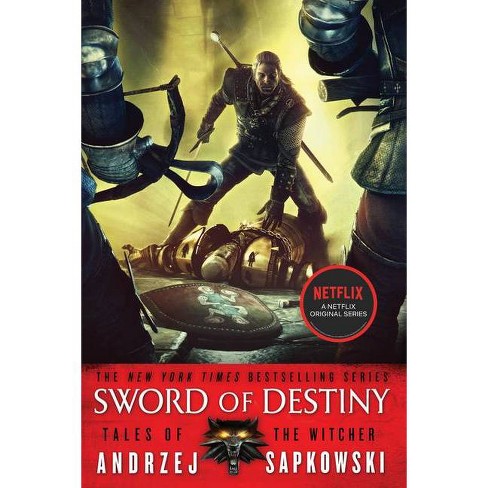 "Geralt is a witcher, a man whose magic powers, enhanced by long training and a mysterious elixir, have made him a brilliant fighter and a merciless assassin. Yet he is no ordinary murderer: his targets are the multifarious monsters and vile fiends that ravage the land and attack the innocent."--

NOW A NETFLIX ORIGINAL SERIES Geralt the Witcher battles monsters, demons and prejudices alike in Sword of Destiny, the second collection of adventures in the New York Times bestselling series that inspired the Netflix show and the hit video games. Geralt is a Witcher, a man whose magic powers, enhanced by long training and a mysterious elixir, have made him a brilliant fighter and a merciless assassin. Yet he is no ordinary murderer: his targets are the multifarious monsters and vile fiends that ravage the land and attack the innocent. The Sword of Destiny is the follow up to The Last Wish, and together they are the perfect introduction to a one of a kind fantasy world. And look out for The Tower of Fools, book one of Andrzej Sapkowski's Hussite Trilogy! Witcher collections
The Last Wish
Sword of Destiny Witcher novels
Blood of Elves
The Time of Contempt
Baptism of Fire
The Tower of Swallows
Lady of the Lake
​Season of Storms Hussite Trilogy
The Tower of Fools The Malady and Other Stories: An Andrzej Sapkowski Sampler (e-only) Translated from original Polish by David French

A breath of fresh air in a well-worn genre. Don't miss it!--Fantasy Book Review The universe of Sapkowski's The Witcher is one of the most detailed and best-explored in modern fantasy, offering endless opportunities for fresh ideas ... Complex character relationships enrich this already complex world; this is the sort of series fantasy fans will cherish.--B&N The Lady of the Lake is, without any doubt, the best and most profound fantasy novel I have ever read. It is hard to put down, yet also a challenging and deeply rewarding book. And it is genuinely moving. I have never read a fantasy series like this, and suspect I never will again.--Nerds of a Feather on The Lady of the Lake The Witcher delivers one of the most intense and rewarding role-playing experiences this year.--GT Reviews on The Witcher video game Delightful, intense, irreverent, and compelling....you have to read The Witcher books because they are rife with all of the elements that make you love fiction, and especially fantasy, in the first place....In a word, The Witcher delivers.--Hypable I really, really enjoyed this book ... None of the characters in Sapkowski's world are black or white; they are all shades of grey, including Geralt and the monsters.--The Deckled Edge It is [his] world-weariness combined with his battle-honed powers that make Geralt such an interesting character. Here's hoping The Last Wish is merely the opening chapter in his English language adventures.--Edge Like a complicated magic spell, a Sapkowski novel is a hodgepodge of fantasy, intellectual discourse, and dry humor. Recommended.--Time Like Mieville and Gaiman, [Sapkowski] takes the old and makes it new ... fresh take on genre fantasy.--Foundation on The Last Wish New battle mechanics, a fantastic storyline, and a gritty setting make The Witcher one of the most engrossing, mature RPGs to arrive on the PC in years.--Gamespot.com on The Witcher video game One of the best and most interesting fantasy series I've ever read. Though it functions well as adventure fiction, it has added depth and value as satire and commentary on fantasy literature ... Sapkowski is a genuine stylist.--Nerds of a Feather Sapkowski has a phenomenal gift for narrative, inventing sensational events, creating a suggestive mood, and building up the suspense along with a dazzling, slightly cynical sense of humor.--Jacek Sieradzki, Polityka on The Last Wish Sapkowski is very good at creating interesting, imaginative characters with unusual levels of depth to them ... The Last Wish is an enjoyable book full of stories both melancholy and comic.--The Wertzone Sapkowski's The Last Wish is a great collection of short stories centered around a witcher, Geralt - a rare sorcerous breed who hunts down the monstrous but is feared by the innocent. With a wondrous mix of Eastern European folklore and myth, beautiful princesses, mischievous demons and where all is not as it seems, The Last Wish is a great read - perfect for dipping into or just reading cover to cover, as I did.--Waterstones This beautifully written character-based story from Polish author Andrzej Sapkowski ... a refreshing champion.--The Specusphere This is a series you can sink your teeth into.--BuzzFeed News

Andrzej Sapkowski was born in 1948 in Poland. He studied economy and business, but the success of his fantasy cycle about the sorcerer Geralt of Rivia turned him into a bestselling writer. He is now one of Poland's most famous and successful authors.
If the item details above aren’t accurate or complete, we want to know about it.

The Lady of the Lake - (Witcher) by Andrzej Sapkowski

The Fall of Numenor - by J R R Tolkien (Hardcover)

The Stars Undying - (Empire Without End) by Emery Robin (Hardcover)

The Witcher Stories Boxed Set: The Last Wish and Sword of Destiny - by Andrzej Sapkowski (Paperback)