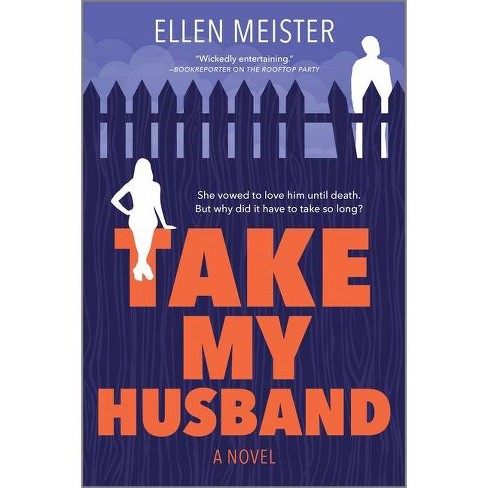 "A page-turner with heart--and much needed laughs." - Caroline Leavitt, New York Times bestselling author of Pictures of You


Only one thing stands in the way of Laurel Applebaum's happiness...Doug Applebaum.

In this darkly comic novel about a wife whose rope is so frayed it's about to snap, Laurel gets a call that her husband has been in an accident. She imagines the worst. But as she is on the way to the ER, another emotion seizes her. Relief. Doug's death could solve all her problems. No more catering to his incessant demands. Then there's the insurance money. Laurel's dreams seem so close. There's just one problem: Doug is very much alive. Now Laurel has to decide if she is going to do something about it.

Subversive, irreverent and surprisingly poignant, Take My Husband probes the deep corners of a marriage and emerges to find the light. For anyone who's spent a little too much time with a significant other and thought, One of us has got to go.

"A sharp, laugh-out-loud novel about a doting wife who has finally had enough. Deeply funny and horribly familiar, TAKE MY HUSBAND is not to be missed! Ellen Meister is a modern day Dorothy Parker, a real treasure!" -- Beth Harbison, New York Times Bestselling author of Confessions of the Other Sister "Take one tantalizing premise (could the death of her husband be a wife's ticket out? And would or could she ever really do anything to speed that up?) along with Meister's smartly sparkling writing, and you've got a page-turner with heart--and much needed laughs." -- Caroline Leavitt, New York Times bestselling author of Pictures of You "Laugh-out-loud funny and deadly seriously, dark and light, it's got wild cliffhangers, twisty twists and an unexpected but highly satisfying ending. Do yourself a favor; READ THIS BOOK!" - David Henry Sterry, bestselling author of Master of Ceremonies: A True Story of Love, Murder, Roller Skates and Chippendales "You know it's going to be fun as soon as you hear the title! Take My Husband is the perfect novel for anyone who's ever been annoyed by the sound of their husband chewing. Laurel, the hero, is the proverbial frog in a pot of water who doesn't realize it's boiling until too late. She's the leading lady we need today: a woman over fifty who attracts all kinds of suitors. A trip to Trader Joe's will never be the same." - Leslie Lehr, bestselling author of A Boob's Life
If the item details above aren’t accurate or complete, we want to know about it.

The Messy Lives of Book People - by Phaedra Patrick

Other People We Married - by Emma Straub (Paperback)

His Other Woman - by Sarah Edghill (Paperback)

The Fall of Numenor - by J R R Tolkien (Hardcover)

The Smart One - by Ellen Meister (Paperback)

Secret Confessions of the Applewood PTA - by Ellen Meister (Paperback)