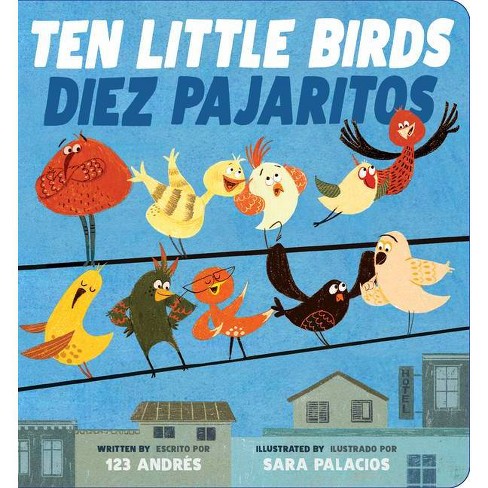 Count to 10 and back again with Latin Grammy Award-winning children's musical duo 123 Andrés in this bilingual board book!

The popular song from 123 Andrés' Latin Grammy Award-winning album is cleverly and beautifully brought to life in this bright, bouncy board book! Each of the 10 birds is given a fun and silly personality, and children will love to follow along as each flies away -- and escapes a lurking kitty!

123 Andrés are gifted lyricists and storytellers, and this bilingual board book perfectly captures their energy and charm. Pura Belpré Illustration Honor recipient Sara Palacios's gorgeous illustrations elevate the text and make this book a must-have for any home or school library!

[123 Andrés is] a rockstar for little language learners. -- Billboard

Sara Palacios is the illustrator of the Pura Belpré honor book Marisol McDonald Doesn't Match, How to Code a Sandcastle, Shaking Things Up: 14 Young Women Who Changed the World, Sing with Me / Canta Conmigo, Hello, Friend / Hola, Amigo, and more. She divides her time between San Francisco and Mexico City.
Andrés grew up in Bogotá, Colombia, and learned how to play the guitar from his father at an early age. He had his first studio experience at age eight, and from there he went on to earn a Doctorate in music and won the National Composition Contest in Colombia for one of his early songs. Since then, Andrés and his partner Christina -- together, 123 Andrés -- won the Latin Grammy for Best Children's Album in 2016, the Parent's Choice Gold Award, and a Notable Children's Recording by the American Library Association. Their Latin Grammy nominated debut album, ¡Uno, Dos, Tres Andrés en español y en inglés!, was hailed by the Boston Globe: Joyous new album... hopscotches around the Spanish-speaking world, seamlessly switching from bachata and bolero to mariachi and vallenato.
If the item details above aren’t accurate or complete, we want to know about it.