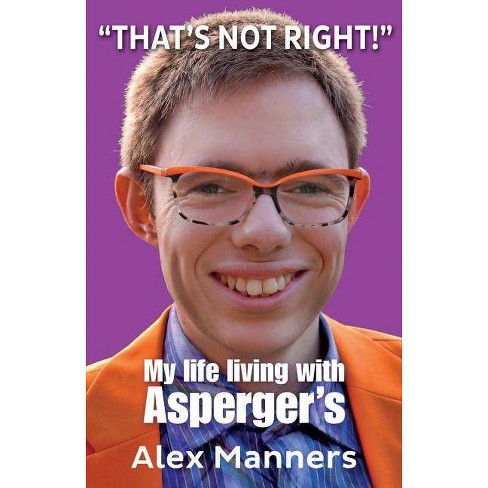 Alex Manners was diagnosed with Asperger's syndrome in 2007 when he was ten years old. By the age of 22 he had written That's Not Right: My Life Living with Asperger's after successfully completing his education, despite it having been a shocking rollercoaster of experiences ranging from good ... to terrible.

This book gives Asperger's people, their parents, families, friends, teachers plus anyone else affected, an invaluable insight into UK education's shortcomings where this group of students is concerned.

It documents how the Manners family fought to overcome the ignorance and misunderstandings in the system, and offers practical, usable advice for anyone else in similar circumstances.

When he was very young the world around Alex seemed confusing and not much made sense. Alex's way of expressing that was by saying, "That's not right!" - hence the title for this book. With hindsight, his parents believe this was the first sign of his Asperger's. But since that time Alex has been putting more "things right" than the vast majority of neurotypical youngsters of the same age.

As Alex says, "Having Asperger's has had its challenges." But he believes it makes him who he is today and will be the catalyst that enables him to achieve his dreams and ambitions. In this book, Alex shares some delightful stories about his journey so far.

He astounds readers with his entrepreneurial skills and huge talents that have taken him onto a number of broadcast television appearances, his own radio show, lectures and talks to some of the best-known blue chip companies and organisations in the UK, a campaign to raise awareness of autism in football, and much more.

"Whatever your circumstances are," says Alex, "never let them define you. Instead, be positive, work hard and you will discover that you can achieve anything. As Walt Disney said, 'All our dreams can come true - if we have the courage to pursue them.'"