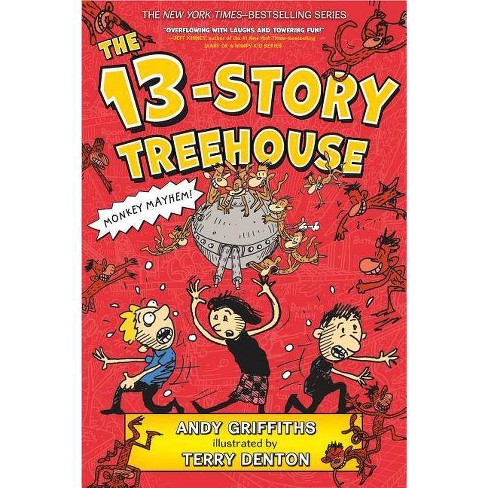 The first in a new series by "New York Times"-bestselling author Griffiths. Andy and Terry live in a treehouse. But it's not just any old treehouse, it's the most amazing treehouse in the world! This treehouse has 13 stories, a bowling alley, a see-through swimming pool, a secret underground laboratory, and a marshmallow machine. Illustrations.

Andy and Terry live in a treehouse. But it's not just any old treehouse, it's the most amazing treehouse in the world!

This treehouse has thirteen stories, a bowling alley, a see-through swimming pool, a secret underground laboratory, and a marshmallow machine that follows you around and automatically shoots marshmallows into your mouth whenever you are hungry. Life would be perfect for Andy and Terry if it wasn't for the fact that they have to write their next book, which is almost impossible because there are just so many distractions, including thirteen flying cats, giant bananas, mermaids, a sea monsters pretending to be mermaids, enormous gorillas, and dangerous burp gas-bubblegum bubbles! Join the fun with The 13-Story Treehouse by Andy Griffiths and Terry Denton. This title has Common Core connections.

"A series starter that will appeal to fans of Jeff Kinney and Dav Pilkey . . . A treat for all . . . And guess what? It makes for good tree house reading." --Booklist

"Fans of Jeff Kinney's Diary of a Wimpy Kid and Lincoln Peirce's Big Nate series will be drawn to this book, while parents will enjoy the absence of snarky humor." --School Library Journal "Longtime collaborators Griffiths and Denton (Killer Koalas from Outer Space) get metafictional in their latest book (first published in Australia), and the result is anarchic absurdity at its best. Young buddies Andy and Terry live together in the sort of tree house that kids dream about, complete with bowling alley, shark tank, vines to swing from, and underground laboratory." --Publishers Weekly, starred review "Boys in particular will like the burping contests, gross creatures, and ridiculous choices that Terry and Andy make throughout the book. And as if killer mermaids are not enough, there are sea monkeys. And a giant gorilla. And a giant banana. And the return of the catnary. See? Silly, ridiculous fun. Kids will love it." --Kris Sauer, Children's Literature

Andy Griffiths is the New York Times bestselling author of What Body Part is That?, Killer Koalas From Outer Space, The Big Fat Cow that Goes Kapow, and The Cat on the Mat is Flat. He lives in Australia.

Terry Denton has worked with Andy on many books, including Killer Koalas From Outer Space and The Big Fat Cow that Goes Kapow. He lives in Australia with his wife and three kids.