The American Librarian - by Madeline Martin 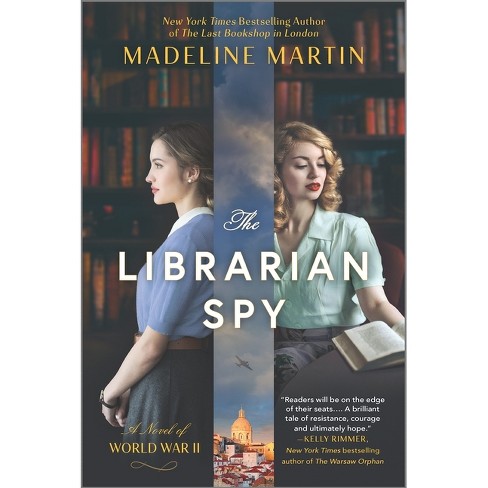 "In Madeline Martin's stirring new novel, readers will be whisked into her brilliantly depicted portrayal of 1940's Lisbon, Portgual, and Lyon, France. Martin captures the essence of the French resistance in war-riddled France as we race with hearts in our throats through Elaine's harrowing tale, juxtaposed with Ava's thrilling and engrossing passages illustrated with sensory delights. Both heroines push the boundaries of their worlds, risking much in their shared missions for survival and hope. Not to be missed, The Libarian Spy is an inspiring novel that highlights the women who dared to resist in the face of adversity." --Eliza Knight, USA TODAY bestselling author of The Mayfair Bookshop From the New York Times bestselling author of The Last Bookshop in London comes a moving new novel inspired by the true history of America's library spies of World War II. Ava thought her job as a librarian at the Library of Congress would mean a quiet, routine existence. But an unexpected offer from the US military has brought her to Lisbon with a new mission: posing as a librarian while working undercover as a spy gathering intelligence. Meanwhile, in occupied France, Elaine has begun an apprenticeship at a printing press run by members of the Resistance. It's a job usually reserved for men, but in the war, those rules have been forgotten. Yet she knows that the Nazis are searching for the press and its printer in order to silence them. As the battle in Europe rages, Ava and Elaine find themselves connecting through coded messages and discovering hope in the face of war.
If the item details above aren’t accurate or complete, we want to know about it. Report incorrect product info.