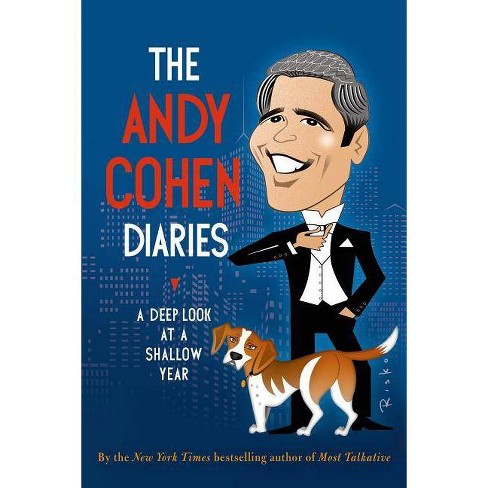 The New York Times bestselling look at the whirlwind life of the beloved pop icon Andy Cohen, in his own cheeky, candid, and irreverent words

A New York Times bestseller, The Andy Cohen Diaries chronicles a year in the whirlwind life of the beloved pop icon, in his own cheeky, candid, and irreverent words

As a TV Producer and host of the smash late night show Watch What Happens Live, Andy Cohen has a front row seat to an exciting world not many get to see. In this dishy, detailed diary of one year in his life, Andy goes out on the town, drops names, hosts a ton of shows, becomes codependent with Real Housewives, makes trouble, calls his mom, drops some more names, and, while searching for love, finds it with a dog.

We learn everything from which celebrity peed in her WWHL dressing room to which Housewives are causing trouble and how. Nothing is off limits - including dating. We see Andy at home and with close friends and family (including his beloved and unforgettable mom). Throughout, Andy tells us not only what goes down, but exactly what he thinks about it. Inspired by the diaries of another celebrity-obsessed Andy (Warhol), this honest, irreverent, and laugh-out-loud funny book is a one-of-a-kind account of the whos and whats of pop culture in the 21st century.

"A remarkable book . . . It's an important text when it comes to understanding what it is to be a gay man today." --Time

"Cable TV's dishiest guy at his dishy best. . . a glamorous, goofy look at 365 days of a charmed showbiz life." --Kirkus "[Cohen's] writing style is conversational and tight, infused with snarky and self-deprecating humor . . . He owns the name-dropping and navel-gazing, but has the honesty, wit and confidence to pull it off, striking a balance between being self-involved and self-aware." --The Associated Press "A wild, starry ride." --Us Weekly "After reading this funny, intimate, candid, honest diary of a year in Andy's life, I couldn't help but wonder, Is Andy Cohen...Carrie Bradshaw?" --Sarah Jessica Parker "The funniest thing I've done all year is read Andy Cohen's Diaries. He has more genuinely funny and surprising encounters with celebrities and sublebrities in a day than I do all year. Then my name popped up. Now I just want to sue him." --Anderson Cooper "I am not, nor have I ever been, engaged to Andy Cohen. But his book is really funny." --Sean Avery "Andy Cohen keeps the oddest hours of anyone in the building. he comes, he goes, he comes back (in the middle of the night.) Now, I finally found out where he's going. If you ask me, nobody should be allowed to have this much fun." --Surfin Percy, Andy's Doorman "Andy Cohen's diaries are the literary equivalent of a Fresca and tequila." --Jimmy Fallon

Andy Cohen is the host and executive producer of Watch What Happens Live, Bravo's late night, interactive talk show. He also serves as executive producer of The Real Housewives franchise and hosts the network's highly rated reunion specials. He's won an Emmy and two Peabody Awards for his work, and he lives in New York City with his dog, Wacha.
If the item details above aren’t accurate or complete, we want to know about it. Report incorrect product info.