The Annals of Unsolved Crime - by Edward Jay Epstein (Paperback) 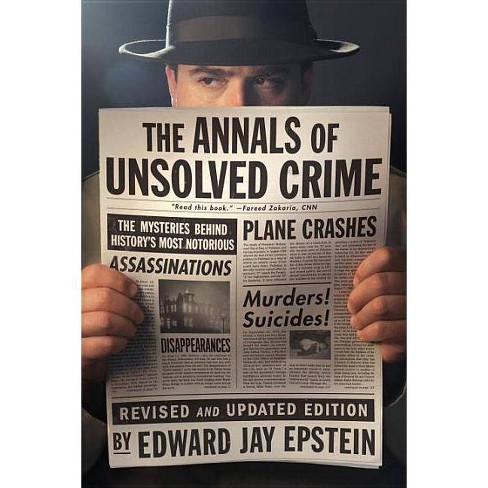 "A grand figure of modern journalism . . . Show Epstein a juicy crime and he will show you how it has been subverted by unseen powers for their own agenda, by the inevitable incompetence of investigative authorities and by the media because it likes a simple story line."
--Michael Wolff, USA Today "It's a terrific book."
--Errol Morris, Oscar-winning filmmaker "[Written by] one of the greatest American investigative journalists, a compelling and informed account of how crime and the needs of power and politics intertwine."
--Patrick Cockburn, The Independent "Epstein takes the accepted version of events from Lincoln's and Kennedy's assassinations to Strauss-Kahn's sexual encounter in that New York hotel, and he then undermines the accepted version with careful research and close reasoning. It's really good fun whether or not you end up convinced, but if you like conspiracy theories, read this book."
--Fareed Zakaria, CNN

"Epstein often is able to provide exactly the kind of comprehensive and levelheaded analysis that is usually drowned out in the sensationalism . . . As a longtime investigative journalist, Epstein knows how to break down a crime scene."
--Newsday "Epstein . . . deserves credit for being the one of the very first to smell a rat in [the Kennedy assassination] investigation . . . His analysis [in The Annals of Unsolved Crime] . . . is well documented."
--Ron Rosenbaum, Slate "Armchair detectives will eat this book with a spoon. Journalism students need to read the Strauss-Kahn piece yesterday. The JFK piece is required reading for assassination buffs. And for the rest of us? The Annals of Unsolved Crime is a guilty pleasure."
--Jesse Kornbluth, The Huffington Post "Whether you're a true crime devotee or simply someone who loves a good story, you'll find things you didn't know--maybe things you would never imagine--all served up in . . . The Annals of Unsolved Crime."
--Criminal Element "Epstein is an inveterate chronicler of bad acts and those who commit them. In a career that began in the 1960s . . . Epstein has done a lot of brave crime reporting over the years . . . [H]is examination of the plane crash that killed Pakistan's president in 1988 is the authoritative product of extensive reporting Epstein carried out in that country. Likewise, his interviews with key players in the investigation that followed the 2000 murder of a Ukrainian journalist provide . . . original details."
--San Francisco Chronicle "Extremely entertaining, this book will be popular with fans of ripped-from-the-headlines crime tales and students of the more historical cases. Highly recommended."
--Library Journal (starred review) Praise for Edward Jay Epstein "[Epstein believes] that conspiracies are more common than most journalists credit; for much of his career, he has reveled in the kind of tantalizing clues that could lead somewhere . . . or nowhere."
--Joe Nocera, The New York Times "[Epstein is] a bulldog researcher."
--Jonathan Yardley, The Washington Post "A brilliant investigator."
--Lou Dobbs "Epstein tells all."
--John Leonard, The New York Times Praise for The Big Picture "A rich adventure that will change the way you look at movies."
--Businessweek "Edward Jay Epstein is here to tell us that when it comes to Hollywood these days, we've got it all wrong."
--The Washington Post Book World "One of the virtues of The Big Picture is Mr. Epstein's astonishing access to numbers that movie studios go to great lengths to keep secret . . . A groundbreaking work that explains the inner workings of the game."
--The Wall Street Journal "Hollywood has needed one of these for a long time--a user's manual. This one could not be more complete. . . .[Grade] A."
--Entertainment Weekly "In his adroit charting of the confidence flow between the various entities and eras Mr. Epstein kicks up a lot of little surprises. . . Edward Jay Epstein is quite good."
--Larry McMurtry, The New York Review of Books
If the item details above aren’t accurate or complete, we want to know about it. Report incorrect product info.