The Ascent of Jacob Bronowski - by Timothy Sandefur (Hardcover) 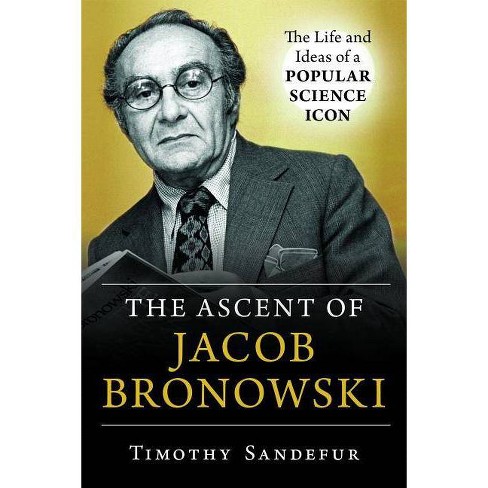 $17.59
MSRP$25.00
no reviews yet
be the first!be the first! ratings
Shipping
Free standard shipping with RedCard
Loading, please wait...
Help us improve this page

""Before Neil deGrasse Tyson, Richard Dawkins, and Carl Sagan, there was Jacob Bronowski, a world-class scientist, caring humanist, elegant poet, magisterial writer, and inimitable host of the first documentary science series, The Ascent of Man. That millennials and Generation Z are unfamiliar with his name makes this biography--the first of this Renaissance man--all the more vital, as science becomes ripped apart by political divisiveness and the need for a unifying message calls out for a voice. Listen to Dr. Bronowski and read this book." --Michael Shermer, publisher of Skeptic magazine, monthly columnist for Scientific American, Presidential Fellow at Chapman University, and author of Heavens on Earth, The Moral Arc, and The Believing Brain "A poet, a mathematician, a historian, and, most of all, a moral philosopher, Jacob Bronowski was a spellbinding speaker on radio and television. Listening to him was like sitting at the feet of a twentieth-century Socrates. His profound thoughts on the human condition are as relevant today as they were fifty years ago, and Timothy Sandefur has done us a great service by writing this book." --Basil Mahon, author of The Forgotten Genius of Oliver Heaviside and coauthor of Faraday, Maxwell, and the Electromagnetic Field "Before Tyson, before Gould, before Sagan, there was Jacob Bronowski. He was a major force for opening the minds of citizens to the importance and wonder of science, as perhaps only a Renaissance man, a poet-turned-mathematician, could be." --Stanley A. Rice, professor, Southeastern Oklahoma State University, and author of Scientifically Thinking: How to Liberate Your Mind, Solve the World's Problems, and Embrace the Beauty of Science "Throughout this lucid account, Bronowski comes across as a complex and fascinating figure whose own writings merit a renewed readership today." --Publishers Weekly
If the item details above aren’t accurate or complete, we want to know about it. Report incorrect product info.