The Bad Side of Books - by D H Lawrence (Paperback) 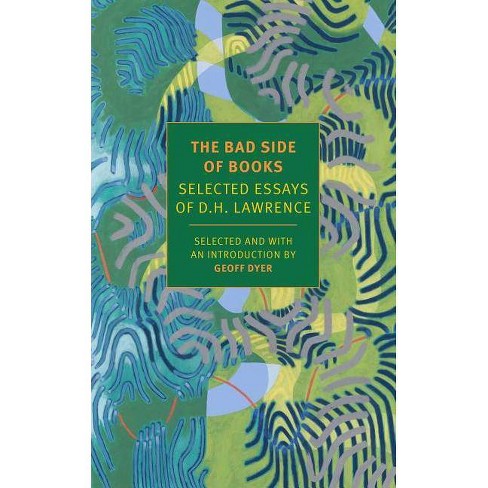 Lawrence's work is as relevant to modern debates about speech and power as it was to the ones that fueled the notoriety in his lifetime." --Lucas Iberico Lozada, Vanity Fair "[Lawrence's] writing is often pure pleasure . . . A quirky, wide-ranging compendium, revealing Lawrence's character and debates over life, art, and faith between the world wars." --Kirkus

Let [Lawrence] travel, unleash him on a debauched person like Magnus, give him sense perceptions and concrete details to chew on--what happens is stunning . . . His sentences are so unbridled and fresh, and so weirdly perfect. Even when he chars a subject, reduces it to ash, the prose is still large and additional like a flame, wondrously rippling in the air." --Zachary Fine, The Nation "The Bad Side of Books contains essays about Thomas Mann and Ernest Hemingway, about Italian flowers and roadside crucifixes, about Cézanne and Van Gogh, about arriving in New Mexico and returning to England. Just about every time, Lawrence has interesting and original observations to make about his subject. . . . To read Lawrence observing something is to witness one of literature's stunning wonders." --Robert Minto, Los Angeles Review of Books Most of this material was new to me, and I enjoyed this book enormously. --Dwight Garner, The New York Times As Geoff Dyer stresses in his penetrating introduction, Lawrence ignores genre straitjackets as he blends travel writing, memoir, philosophical musings, storytelling and a novelist's flair for portraiture and description. . . . No matter what he writes about, though, Lawrence generates--in language crackling with passion and conviction--an intensely reimagined experience. Jonathan Swift, when challenged, could produce a brilliant essay about a broomstick; Lawrence outdoes him in his tour-de-force 'Reflections on the Death of a Porcupine.'" --Michael Dirda, Washington Post

"[W]hy has the New York Review Books Classics imprint brought out a new edition of his selected essays? Because there's much more to Lawrence's work than his detractors care to admit. There is his complex and vivid philosophy, based on following one's primal drives into a more sensual engagement with life and a more honest sense of self. And there is, above all, the lush beauty of his language, prose that has a pulse and gives off heat." --Scott Beauchamp, Washington Examiner "[Lawrence] had the defects of his qualities: he had no defects, he was a genius. . . . He was fiery and flamey and lambent, he was flickering and white-hot and glowing. . . . The defects of his qualities, yes, but what qualities." --Doris Lessing, The New York Review of Books "Lawrence is one of our true prophets, not only in his 'madness for the unknown' . . . but in his lifelong development of a technique, a fictional and poetic way in which the prophetic voice can be given formal expression." --Joyce Carol Oates "Geoff Dyer has selected some of [Lawrence's] most fascinating and accessible pieces to tempt new readers. . . . This is very much a volume for the general reader . . . Comedy and humour abound, as does a provocative honesty. . . . There are countless examples in this volume of Lawrence at his poetic best." --Gerri Kimber, The Times Literary Supplement "It is high time that Lawrence's non-fiction had another airing. . . . For anyone who hasn't read any Lawrence, I would readily recommend it as a good place to start. It presents Lawrence as diverse, brilliant, and strange. He was all these things. --Catherine Brown, Prospect Magazine "[Lawrence] seems to bypass [art] and interpose nothing between the reader and the vision. . . . To read him is to feel oneself in contact with a personality that has broken through form and rhetoric and confronts one in a kind of nakedness." --Anthony Burgess, Flame into Being: The Life and Work of D.H. Lawrence "[Lawrence] had an extraordinary sensitiveness to what Wordsworth called 'unknown modes of being.' He was always intensely aware of the mystery of the world, and the mystery was always for him a numen, divine." --Aldous Huxley
If the item details above aren’t accurate or complete, we want to know about it. Report incorrect product info.