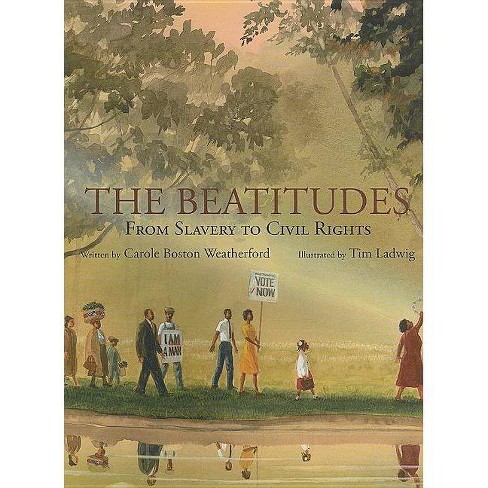 $12.89
0 out of 5 stars with 0 reviews
be the first!be the first! ratings
Shipping
Not available
Help us improve this page

BookPage.com"A stirring tribute to African-American history and to the important role religious faith has played in it over the centuries, The Beatitudes: From Slavery to Civil Rights by Carole Boston Weatherford takes readers on a lyrical journey through the past. Using the Beatitudes from the Bible as a platform for her extended free-verse poem, Weatherford traces the arc of African-American history, starting with the slave era and ending with the swearing-in of President Barack Obama. Along the way, Weatherford alludes to a host of notable African-American figures, including Harriet Tubman, Booker T. Washington, Rosa Parks and Marian Anderson -- individuals whose determination and endurance helped make freedom a reality. Tim Ladwig's beautifully realistic renderings of U. S. Colored Troops, Freedom Riders and civil rights organizers give the book a documentary feel. With The Beatitudes, Weatherford -- winner of the Caldecott Honor for her bookMoses: When Harriet Tubman Led Her People to Freedom -- offers an inspiring review of black history and the ways in which spirituality has guided its leaders. The book includes brief biographies of the famous figures who appear in Weatherford's poem. This is a special testament to the legacy of a people -- a book that's sure to be treasured by future generations of readers." School Library Journal
"Weatherford uses the Beatitudes (Matthew 5:3-12 KJV) as backdrop for a powerful, beautifully produced book. In free verse, she relates the story in first person -- 'I am the Lord your God, ' -- tracing the African-American journey from slavery through the Civil Rights Movement to the inauguration of Barack Obama. Each page begins, 'I was with . . .' as Weatherford focuses on a particular person (Harriet Tubman, Marian Anderson, Emmett Till, Martin Luther King, Jr.) or an event (slave ships, freedom rides, right-to-vote movement). Verses, short and meaningful, carry forth a poignant message, reinforced by Ladwig's inspired, richly hued, expressive illustrations. The words of the Beatitudes, which are printed in their entirety at the book's beginning, run across the bottoms of the pages in softly colored type, making a constant connection to the pictures. In addition, the artist's choice of perspective is exemplary: angry white hecklers back an image of a hopeful-looking Ruby Bridges; Lincoln looks down on a crowded Mall as Marian Anderson sings to the throngs, and Martin Luther King, Jr., gazing into a reflecting pool, sees the smiling faces of two girls (one black and one white). Regardless of race or religion, this is a book to share with today's children who live in a discordant world too often lacking in kindness and civility." Booklist
"Using the Beatitudes of blessings found in the Sermon on the Mount as an underpinning, Weatherford highlights the faith that bolstered the African American struggle for freedom and civil rights. Running along the bottom of the pages, the words serve as a refrain to punctuate Ladwig's elegant watercolors and lend a dreamlike quality to the stirring depictions. The art begins with a portrayal of an anonymous man enduring the Middle Passage, a single beam of light falling across his still-hopeful face, and ends with the much-anticipated inauguration of President Obama. This powerful picture book charts the progress of African Americans in the U.S. in much the same manner as Michelle Cook's Our Children Can Soar. However, instead of a relay-race-style handoff of accomplishments, Weatherford's text illustrates the spiritual presence in the lives of those making a difference. Whether 'ringing the church bells' or 'beating the drum for freedom, ' the Lord was with them." Kids Lit (blog)
"Weatherford has taken Jesus' Sermon on the Mount and created a poem that follows African-American history from slavery through to the election of Barack Obama. . . Weatherford's words are strong and ringing. They both celebrate and mourn, moving ever onward to a brighter future. The book shines with a beautiful combination of faith and history. Ladwig's illustrations add to that shine with strong people shown in moments of strength. . . Highly recommended, this is a book that truly captures the strength of a people. "
If the item details above aren’t accurate or complete, we want to know about it. Report incorrect product info.