The Betrayal - by Helen Dunmore (Paperback) 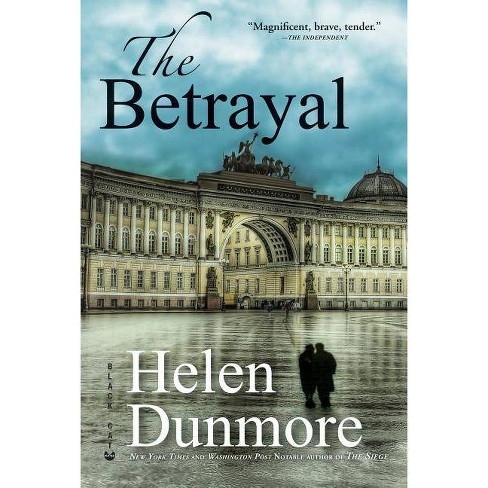 $10.39
no reviews yet
be the first!be the first! ratings
Shipping
Free standard shipping with RedCard
Loading, please wait...
Help us improve this page

--A New York Times Editors' Choice
--Short-listed for The Orwell Prize and The Commonwealth Writers' Prize (South Asia and Europe)
--Long listed for the Man Booker Prize "An emotionally charged thriller, The Betrayal unfolds breathlessly and with great skill. . . . You don't want to put it down. . . . Elegant yet devastating."--The Seattle Times "Vividly depicts the difficulty of living by principle in a tyrannical society, in which paranoia infects every act, and even ordinary citizens become instruments of terror."--The New Yorker "Enormously readable, [The Betrayal] personalizes in intimate detail a harsh and important period in modern Russian history."--Library Journal "Beautifully crafted, gripping, moving, enlightening. Sure to be one of the best historical novels of the year."--Time Out (London) "Magnificent, brave, tender."--Independent on Sunday "Eloquently conveys . . . a terrible chapter in history. . . . This is a book that should be read and valued." --Washington Times "Somber, [with] stringent beauty."--Chicago Tribune "Historical fiction of the highest order." --Kirkus Reviews "A masterpiece. An extraordinarily powerful evocation of a time of unimaginable fear. We defy you to read it without a pounding heart and a lump in your throat."--Grazia "With precise period detail and astute psychological insight, Dunmore brings the last months of Stalin's reign to life and reminds us why some eras shouldn't be forgotten."--Publishers Weekly "A remarkably feeling, nuanced novel . . . With her seemingly small canvas, Dunmore has created a universe."--Sunday Herald "Enthralling. Emotionally gripping . . . ordinary people struggling against a city's beautiful indifference, and clinging on for dear life."--Daily Telegraph "Scrupulous, pitch-perfect. With heart-pounding force, Dunmore builds up a double narrative of suspense."--Sunday Times (UK) "Dunmore chillingly evokes the atmosphere of Soviet suspicion, where whispered rumors and petty grievances metastasize into lies and denunciation. A gripping read."--Daily Mail "Meticulous, clever, eloquent. An absorbing and thoughtful tale of good people in hard times."--The Guardian "Dunmore's genius lies in her ability to convey the strange Soviet atmosphere of these very Soviet stories using the most subtle of clues."--Spectator "Storytelling on a grand scale."--The Times (UK) "Riveting . . . Gripping . . . Soviet Russia is a popular setting for historical novels . . . but The Betrayal takes this genre to the next level. . . . Because her characters are so expertly drawn, the dialogue so believable, and the conflicts so intriguing, the historical setting paints itself. There is no extraneous description, no heavy-handed narrator forcing the reader to see the scene. The reader is simply in 1950's Leningrad, struggling with Anna and Andrei. Dunmore's ability to integrate the reader so seamlessly into her narrative is masterful. This is a powerful novel, one that has stuck in my mind since I finished reading it."--Sarah Sacha Dollacker, BookBrowse
If the item details above aren’t accurate or complete, we want to know about it. Report incorrect product info.