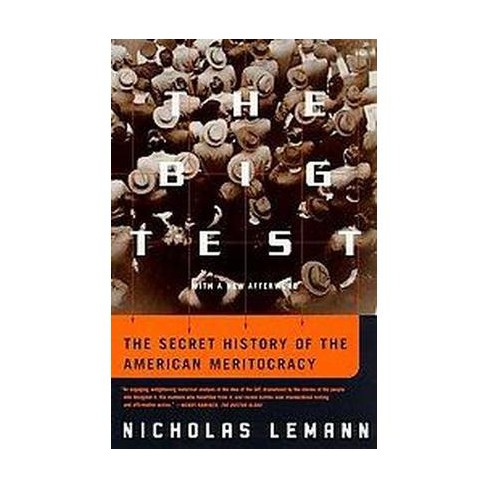 "[An] engaging, enlightening historical analysis of the idea of the SAT, dramatized by stories of the people who designed it and the students who benefited from it, and . . . recent battles over standardized testing and affirmative action". "The Boston Globe".

What do we know about the history, origin, design, and purpose of the SAT? Who invented it, and why? How did it acquire such a prominent and lasting position in American education? The Big Test reveals the ideas, people, and politics behind a fifty-year-old utopian social experiment that changed this country. Combining vibrant storytelling, vivid portraiture, and thematic analysis, Lemann shows why this experiment did not turn out as planned. It did create a new elite, but it also generated conflict and tension--and America's best educated, most privileged people are now leaders without followers. Drawing on unprecedented access to the Educational Testing Service's archives, Lemann maintains that America's meritocracy is neither natural nor inevitable, and that it does not apportion opportunity equally or fairly. His important study not only asks profound moral and political questions about the past and future of our society but also carries implications for current social and educational policy. As Brent Staples noted in his New York Times editorial column: Mount Holyoke College in Massachusetts announced that prospective students would no longer be required to submit SAT scores with their applications. . . . Holyoke's president, Joanne Creighton, was personally convinced by reading Nicholas Lemann's book, The Big Test, which documents how the SAT became a tool for class segregation. All students of education, sociology, and recent U.S. history--especially those focused on testing, theories of learning, social stratification, or policymaking--will find this book fascinating and alarming.

"I use The Big Test in my Perspectives on Secondary Education class. It makes students come face-to-face with issues of race, class, and inequality in secondary education, and since everyone has taken 'the big test, ' it really hits home." --Susan Semel, Associate Professor, Hofstra University

"An engaging, enlightening historical analysis of the idea of the SAT, dramatized by the stories of the people who designed it, the students who benefited from it, and recent battles over standardized testing and affirmative action." --Wendy Kaminer, The Boston Globe "Engrossing . . . . The narrative of The Big Test is carried along by a string of life stories [that] once more display Nicholas Lemann's talent for distilling social analysis out of personal history." --Alan Ryan, The New York Review of Books

Born in New Orleans in 1954, Nicholas Lemann has been a journalist for more than twenty years. His last book was the prizewinning The Promised Land: The Great Black Migration and How It Changed America. He lives in Pelham, New York.