The Book of Frogs - by Tim Halliday (Hardcover) 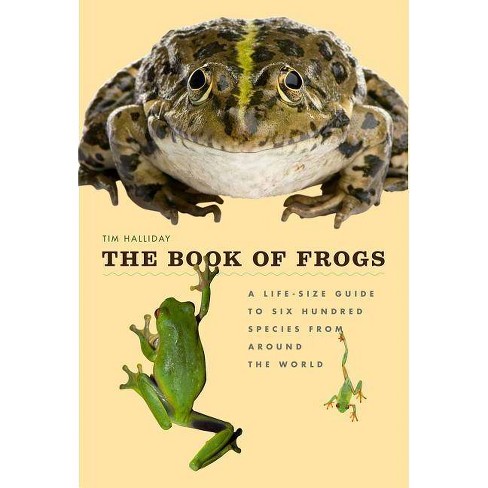 $43.49
0 out of 5 stars with 0 reviews
be the first!be the first! ratings
Shipping
Free standard shipping with RedCard
Help us improve this page

With over 7,000 known species, frogs display a stunning array of forms and behaviors. A single gram of the toxin produced by the skin of the Golden Poison Frog can kill 100,000 people. Male Darwin's Frogs carry their tadpoles in their vocal sacs for sixty days before coughing them out into the world. The Wood Frogs of North America freeze every winter, reanimating in the spring from the glucose and urea that prevent cell collapse. The Book of Frogs commemorates the diversity and magnificence of all of these creatures, and many more. Six hundred of nature's most fascinating frog species are displayed, with each entry including a distribution map, sketches of the frogs, species identification, natural history, and conservation status. Life-size color photos show the frogs at their actual size--including the colossal seven-pound Goliath Frog. Accessibly written by expert Tim Halliday and containing the most up-to-date information, The Book of Frogs will captivate both veteran researchers and amateur herpetologists. As frogs increasingly make headlines for their troubling worldwide decline, the importance of these fascinating creatures to their ecosystems remains underappreciated. The Book of Frogs brings readers face to face with six hundred astonishingly unique and irreplaceable species that display a diverse array of adaptations to habitats that are under threat of destruction throughout the world.
If the item details above aren’t accurate or complete, we want to know about it. Report incorrect product info.