The Book of V. - by Anna Solomon 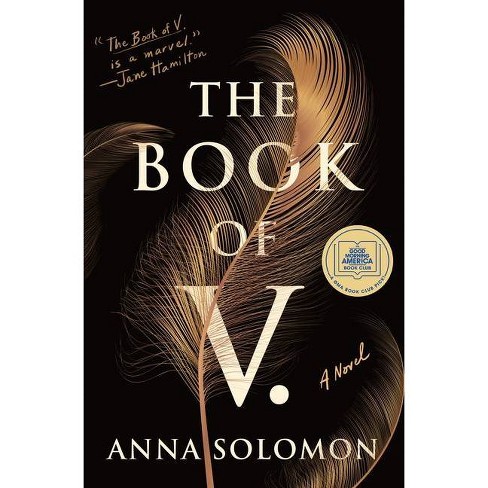 "This ... historical novel intertwines the lives of the Bible's Queen Esther, a senator's wife in the 1970s, and a Brooklyn mother in 2016, whose stories trace surprising and moving parallels across centuries"--

A BELLETRIST BOOK CLUB PICK For fans of The Hours and Fates and Furies, a bold, kaleidoscopic novel intertwining the lives of three women across three centuries as their stories of sex, power, and desire finally converge in the present day. Lily is a mother and a daughter. And a second wife. And a writer, maybe? Or she was going to be, before she had children. Now, in her rented Brooklyn apartment she's grappling with her sexual and intellectual desires, while also trying to manage her roles as a mother and a wife in 2016. Vivian Barr seems to be the perfect political wife, dedicated to helping her charismatic and ambitious husband find success in Watergate-era Washington D.C. But one night he demands a humiliating favor, and her refusal to obey changes the course of her life--along with the lives of others. Esther is a fiercely independent young woman in ancient Persia, where she and her uncle's tribe live a tenuous existence outside the palace walls. When an innocent mistake results in devastating consequences for her people, she is offered up as a sacrifice to please the King, in the hopes that she will save them all. In Anna Solomon's The Book of V., these three characters' riveting stories overlap and ultimately collide, illuminating how women's lives have and have not changed over thousands of years.

"The engrossing, highly readable, darkly sexy third novel by Anna Solomon...The Book of V. is a meditation on female power and powerlessness, the stories told about women and the ones we tell about and to ourselves." --The New York Times Book Review "An absorbing story about desire, power imbalances and the quest for self-determination--a feminist rallying cry born in the private spaces of women's lives." --People Magazine, *Book of the Week* The Book of V. is brainy and sexy and roots us so completely in these three women's bodies and lives, that I couldn't put it down. The writing is so brilliant some passages took my breath away, and when I thought I knew where the novel was headed, I was wrong. This novel is a gift, and I highly recommend you read it. --Ann Napolitano, New York Times bestselling author of Dear Edward Irresistible, sexy and intelligent...The Book of V. radiates a dynamism that invites rereads and generously keeps giving--challenging and arousing us as it delights. --The Washington Post

"Compulsively readable . . . blending real history and radical fiction into one enthralling whole. --Entertainment Weekly's Top Ten Books of 2020 So Far "The Book of V. is a marvel. It's a testament to the enduring strength and flexibility of the novel form itself, and a testament to the wisdom, clarity, and boldness of Anna Solomon. She is a remarkable writer who has written an extraordinary book. --Jane Hamilton, author of The Excellent Lombards "[An] engrossing story... Even if you think you don't like historical fiction, you'll eat this one up." --Good Housekeeping "Solomon connects these stories in a way that's fresh and tantalizing, with fascinating intergenerational discussions about desire, duty, family, and feminism, as well as a surprising, completely believable twist. This frank, revisionist romp through a Bible tale is a winner." --Publishers Weekly, *starred review* "In The Book of V., Anna Solomon reaches across centuries to capture the timeliness and timelessness of being a strong, passionate woman in a world governed by men. How far we've come and yet how many of the battles look the same. I was riveted by this searingly inventive, humane, and honest page-turner of a novel. --Mary Beth Keane, author of Ask Again, Yes "Thought-provoking fiction... The Book of V. asks complicated questions about power, desire, and the evolution of women's roles." --Real Simple "Moving, surprising, so touchingly detailed and authentic as to seem more real than life...For a novel to offer such delightfully realized characters as well as such taut pacing is a fine accomplishment. --Shelf Awareness Anna Solomon's The Book of V. is a novel as fierce as its heroines, traversing centuries to explore the tentacles of desire and despair that can anchor the psyche or explode it. It's a book that understands how many different women live in every woman: the lover, the mother, the artist, the rebel, the friend, the caregiver, the beast, the survivor. Solomon's imagination is as thrilling as it is nuanced--gripping the senses and the heart at once, telling a story that vibrates with urgency and truth. --Leslie Jamison, New York Times bestselling author of Make it Scream, Make it Burn and The Empathy Exams "Finely written and often vividly imagined...A bold, fertile work lit by powerful images." --Kirkus Reviews, *starred review* "[An] evocative novel...each story line is captivating." --Booklist "Solomon masterfully interweaves the stories of three women... [she] reminds us that women are not archetypes, not just good or evil...Indeed, Lily gives voice to the lesson that she has learned: 'The type of woman you imagine yourself becoming does not exist.'" --Hadassah Magazine

Anna Solomon is the author of Leaving Lucy Pear and The Little Bride and a two-time winner of the Pushcart Prize. Her short fiction and essays have appeared in publications including The New York Times Magazine, One Story, Ploughshares, Slate, and more. Coeditor with Eleanor Henderson of Labor Day: True Birth Stories by Today's Best Women Writers, Solomon was born and raised in Gloucester, Massachusetts, and lives in Brooklyn with her husband and two children.
If the item details above aren’t accurate or complete, we want to know about it. Report incorrect product info.