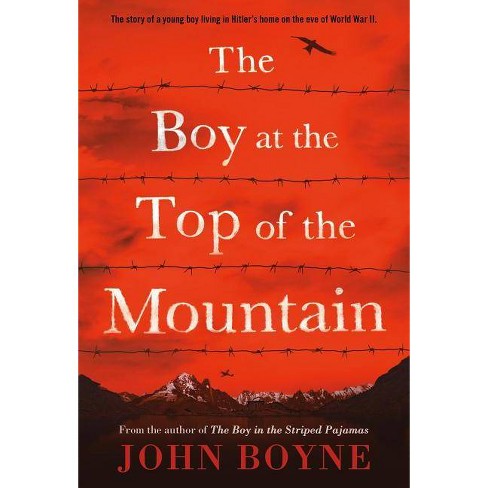 $7.59
MSRP$7.99
0 out of 5 stars with 0 reviews
be the first!be the first! ratings
Shipping
Free standard shipping with RedCard
Help us improve this page

The Boy at the Top of the Mountain by John Boyne, the author of The Boy in the Striped Pajamas, is another extraordinary historical fiction about World War II and innocence in the face of evil.

When Pierrot becomes an orphan, he must leave his home in Paris for a new life with his aunt Beatrix, a servant in a wealthy Austrian household. But this is no ordinary time, for it is 1935 and the Second World War is fast approaching; and this is no ordinary house, for this is the Berghof, the home of Adolf Hitler. Pierrot is quickly taken under Hitler's wing and thrown into an increasingly dangerous new world: a world of terror, secrets, and betrayal from which he may never be able to escape. With skill and emotional detachment, Boyne tells Pieter's story through descriptions and dialogue that are concise, spare, and vivid . . . . Pieter's traumatic childhood, infatuation and interactions with Hitler, adolescent angst, and destructive choices will captivate teens and prompt thought-provoking discussion. --School Library Journal, starred review Boyne's (The Boy in the Striped Pajamas, 2006) story is unarguably a powerful one with an often visceral impact. --Booklist A compelling account of the attractions of power, the malleability of youth and the terrible pain of a life filled with regret. --The Guardian John Boyne delivers a poignant tale of innocence ruined by Nazism. This is a story full of suspense and heartbreak that will leave readers wanting more. Compare this book to The Boy in the Striped Pajamas. --School Library Connection
If the item details above aren’t accurate or complete, we want to know about it. Report incorrect product info.