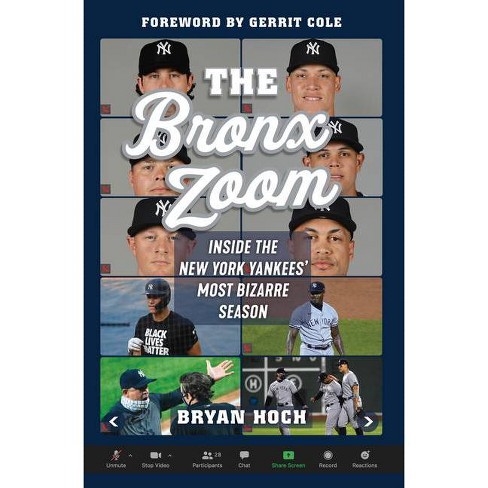 "The Bronx Zoom is a fascinating inside look at the 2020 Yankees during unprecedented times. Pitchers and catchers reported to the George M. Steinbrenner Field complex in Tampa, Florida on the morning of February 12, 2020. The coronavirus pandemic that would upend Major League Baseball's 2020 campaign seemed a distant consideration for a sports team, though it was visible on the front page of The New York Times that thudded on manager Aaron Boone's desk that morning. Soon the dominos started to fall, commencing what would be a season like none before. Mission 27 author Bryan Hoch guides readers through a dizzying series of twists and turns, meeting at the intersection of the most celebrated franchise in professional sports and an attempt to play baseball through a global pandemic that has altered life as we know it. Through countless interviews and previously untold behind-the-scenes tales, readers will get a glimpse at the machinations behind an iconic organization, players at their most personal, and a season for the history books. "--

The definitive chronicle of a chaotic and unforgettable season, featuring a heartfelt foreword from Opening Day starter and lifelong Yankee fan Gerrit Cole

The New York Yankees are unprecedented. With more than twice as many World Series titles as their closest competitor, the most MVPs and the most Hall of Fame inductees, there's never been anything quite like the franchise's storied history.

Then the 2020 season took place, and the greatest team in American sports found out what "unprecedented" really means.

The Bronx Zoom provides an intimate and engaging look behind the scenes of a year unlike any other. Veteran reporter Bryan Hoch guides readers through dizzying twists and turns as the Yankees navigate a season amidst the COVID-19 pandemic, historic movements for equality and social justice, and a bitterly contested presidential election.

From a spring training cut short to the postseason's final out, new insights and anecdotes emerge from countless interviews with players, executives and Yankees personalities, providing personal perspectives on the challenges and joys of the 2020 season.

Go behind the scenes with the talented roster, as manager Aaron Boone pairs his new big-ticket ace with a powerhouse offense alternating between torrid stretches and lengthy slumps.

Relive the bizarre final showdown against the upstart Tampa Bay Rays, where the American League East rivals found themselves occupying the same Southern California hotel while putting championship aspirations on the line in an empty ballpark.

The Bronx Zoom is a thoroughly reported narrative of a monumental and defining era of our lives, told with humor and pathos through the familiar lens of Yankees baseball. No baseball lover or Yankee fan's library is complete without it.

Bryan Hoch has covered New York baseball for two decades, working as the Yankees' MLB.com beat reporter since 2007. He is the author of The Baby Bombers: The Inside Story of the Next Yankees Dynasty and the co-author of Mission 27: A New Boss, A New Ballpark, and One Last Ring for the Yankees' Core Four.
If the item details above aren’t accurate or complete, we want to know about it. Report incorrect product info.