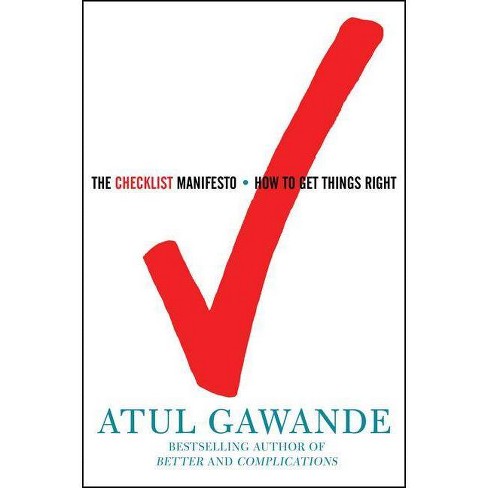 "I read The Checklist Manifesto in one sitting yesterday, which is an amazing tribute to the book that Gawande has crafted. Not only is the book loaded with fascinating stories, but it honestly changed the way I think about the world. It is the best book I've read in ages." --Steven Levitt, author of Freakonomics

"Few medical writers working today can transmit the gore-drenched terror of an operation that suddenly goes wrong--a terror that has a special resonance when it is Dr. Gawande himself who makes the initial horrifying mistake. And few can make it as clear as he can what exactly is at stake in the effort to minimize calamities." --The New York Times "Even skeptical readers will find the evidence staggering. . . . Thoughtfully written and soundly defended, this book calls for medical professionals to improve patient care by adopting a basic, common-sense approach." --The Washington Post "A persuasive champion of his cause." --The Economist "The Checklist Manifesto is beautifully written, engaging, and convincingly makes the case for adopting checklists in medicine, a project to which Gawande has devoted significant time over the last several years. . . . It is in many ways the most personal of his books, a direct call to action to change the way health care is delivered through straightforward and simple, yet proven, means. It is a call that deserves to be heard and heeded." --Journal of the American Medical Association "Gawande deftly weaves in examples of checklist successes in diverse fields like aviation and skyscraper construction. . . . Fascinating reading." --New York Times Book Review "This is a brilliant book about an idea so simple it sounds dumb until you hear the case for it. Atul Gawande presents an argument so strong that I challenge anyone to go away from this book unconvinced." --The Seattle Times "Fascinating . . . presents a convincing case that adopting more checklists will surely help." --Bloomberg News "Gawande argues convincingly and eloquently." --San Francisco Chronicle "The scope goes well beyond medicine. . . Read this book and you might find yourself making checklists for the most mundane tasks--and be better off for it." --BusinessWeek "A vivid, punchy exposition of an intriguing idea: that by-the-book routine trumps individual prowess." --Publishers Weekly "Maintains the balance between accessibility and precision. He manages to be vivid without being gruesome. . . ." --The Guardian (UK) "Riveting and thought-provoking." --The Times (UK) "Eye-popping. . . Gawande writes with vigor and clarity." --New Haven Advocate "Gawande manages to capture medicine in all of its complex and chaotic glory, and to put it, still squirming with life, down on the page. With this book, Gawande inspires all of us, doctor or not, to be better." --The New York Times Book Review on Better "Gawande is unassuming in every way, and yet his prose is infused with steadfast determination and hope. If society is the patient here, I can't think of a better guy to have our back." --The Boston Globe on Better "Remarkable . . . Brings to modern high-tech medicine the same clinical watchfulness that writers such as Williams and Sacks have brought to bear on the lives and emotions of often fragile patients." --Sherwin B. Nuland, The New York Review of Books, on Better "Gawande is a writer with a scalpel pen and an X-ray eye. Diagnosis: riveting." --TIME, on Better
If the item details above aren’t accurate or complete, we want to know about it. Report incorrect product info.