The Children's Blizzard - by Melanie Benjamin 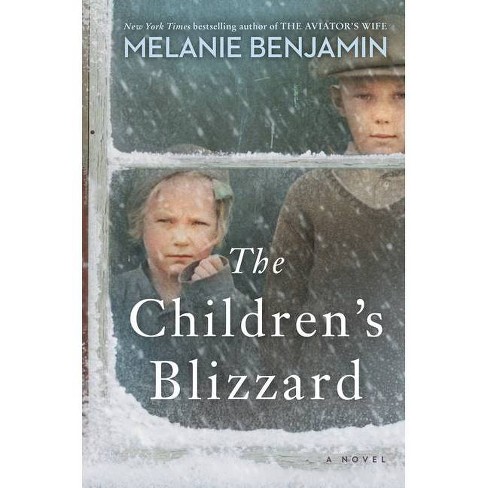 From the New York Times-bestselling author of The Aviator's Wife comes a story of courage on the prairie, inspired by the devastating storm that struck the Great Plains in 1888.

From the New York Times bestselling author of The Aviator's Wife comes a story of courage on the prairie, inspired by the devastating storm that struck the Great Plains in 1888, threatening the lives of hundreds of immigrant homesteaders, especially schoolchildren. "A nail-biter . . . poignant, powerful, perfect." --Kate Quinn, author of The Alice Network

The morning of January 12, 1888, was unusually mild, following a punishing cold spell. It was warm enough for the homesteaders of the Dakota Territory to venture out again, and for their children to return to school without their heavy coats--leaving them unprepared when disaster struck. At the hour when most prairie schools were letting out for the day, a terrifying, fast-moving blizzard blew in without warning. Schoolteachers as young as sixteen were suddenly faced with life and death decisions: Keep the children inside, to risk freezing to death when fuel ran out, or send them home, praying they wouldn't get lost in the storm? Based on actual oral histories of survivors, this gripping novel follows the stories of Raina and Gerda Olsen, two sisters, both schoolteachers--one becomes a hero of the storm and the other finds herself ostracized in the aftermath. It's also the story of Anette Pedersen, a servant girl whose miraculous survival serves as a turning point in her life and touches the heart of Gavin Woodson, a newspaperman seeking redemption. It was Woodson and others like him who wrote the embellished news stories that lured northern European immigrants across the sea to settle a pitiless land. Boosters needed them to settle territories into states, and they didn't care what lies they told these families to get them there--or whose land it originally was. At its heart, this is a story of courage, of children forced to grow up too soon, tied to the land because of their parents' choices. It is a story of love taking root in the hard prairie ground, and of families being torn asunder by a ferocious storm that is little remembered today--because so many of its victims were immigrants to this country.

"Melanie Benjamin never fails to create compelling, unforgettable characters and place them against the backdrop of startling history."--Lisa Wingate, author of The Book of Lost Friends "In this atmospheric novel, as relentlessly paced as a thriller, you experience the encroaching storm from many perspectives and, in the process, understand something important about the tenacity of the human spirit."--Christina Baker Kline, author of The Exiles

"Melanie Benjamin reminds us that immigrant stories are at the heart of American history. She weaves a moving and uplifting tale of courage, family, and sacrifice."--Jean Kwok, author of Searching for Sylvie Lee "Benjamin draws you into the lives, hardships, and triumphs of a diverse cast of characters and compels you to care about them deeply. The Children's Blizzard has a pulse-pounding pace, a giant heart, and a sweep as wide as the prairie itself."--Elizabeth Letts, author of Finding Dorothy "Melanie Benjamin has a gift for opening up and fleshing out her characters, giving readers unfettered access into their hearts and minds. Beautiful and haunting, this is a story of ordinary people forced to face the most extraordinary of moments."--Allison Pataki, author of The Queen's Fortune

"Chilling, quite literally . . . Benjamin has taken an almost-forgotten historical footnote and created a vivid and poignant story of Midwestern immigrants pursuing the American dream."--Sarah McCoy, author of Marilla of Green Gables "The Children's Blizzard is that rarest of novels, as riveting in its story as it is delicate and empathetic with its characters. Melanie Benjamin has written an unforgettable tale full of fascinating and forensic historical detail."--Peter Geye, author of Northernmost "Fans of Laura Ingalls Wilder's Little House series will be fascinated by The Children's Blizzard."--Oprah Daily "Readers will want to curl up with a warm blanket by the fire for this novel inspired by real events. . . . [Benjamin] uses her prodigious gifts for bringing history to life."--AARP "In this piercingly detailed drama, riveting in its action and psychology, Benjamin reveals the grim aspects of homesteading, from brutal deprivations to violent racism toward Native Americans and African Americans, while orchestrating, with grace and resonance, transformative moral awakenings and sustaining love."--Booklist (starred review) "Benjamin revisits the Children's Blizzard that killed 235 people in January 1888 in this sprawling, well-told story. . . . There's great suspense inherent to the events. Benjamin achieves a balance of grand drama and devastatingly intimate moments."--Publishers Weekly

Melanie Benjamin is the New York Times bestselling author of Mistress of the Ritz, The Girls in the Picture, The Swans of Fifth Avenue, The Aviator's Wife, The Autobiography of Mrs. Tom Thumb, and Alice I Have Been. Benjamin lives in Chicago, where she is at work on her next historical novel.
If the item details above aren’t accurate or complete, we want to know about it. Report incorrect product info.