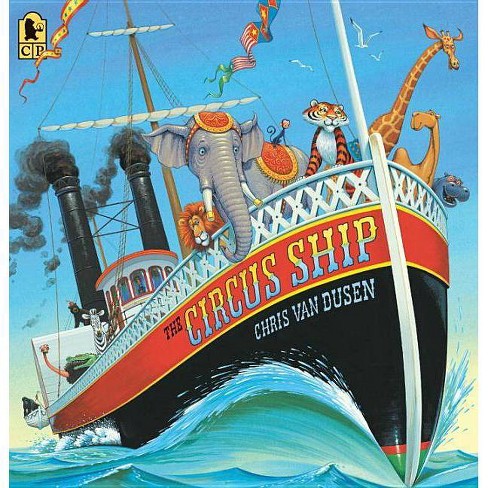 After courageously swimming to shore when the ship that they are traveling on sinks and the wretched captain does nothing to rescue them, circus animals find a way to become a valued part of a coastal community.

"The verse is sprightly, but the pictures are the true stunners." --Kirkus Reviews (starred review) When a circus ship runs aground off the coast of Maine, the poor animals are left on their own, but they soon win over the wary townspeople with their kind, courageous ways. So well do the critters blend in that when the greedy circus owner returns to claim them, villagers of all species conspire to outsmart the bloated blowhard. With buoyant rhymes and brilliantly caricatured illustrations evoking the early nineteenth century, Chris Van Dusen presents a hugely entertaining tale about the bonds of community--and a hidden-pictures spread for eagle-eyed readers of all ages.

The verse is sprightly, but the pictures are the true stunners. Bright, lampooning gouaches (familiar from the Mercy Watson series) and dizzying perspective perfectly suit this picaresque tale...Children will pore over panoramic spreads that invite them to find each of the 15 animals and celebrate a denouement that serves up Mr. Paine's just deserts. Splendid!
--Kirkus Reviews (starred review)

Chris Van Dusen is the illustrator of the Mercy Watson books by Kate DiCamillo. He wrote and illustrated Down to the Sea with Mr. Magee, A Camping Spree with Mr. Magee, and If I Built a Car. He lives in Maine.
If the item details above aren’t accurate or complete, we want to know about it. Report incorrect product info.