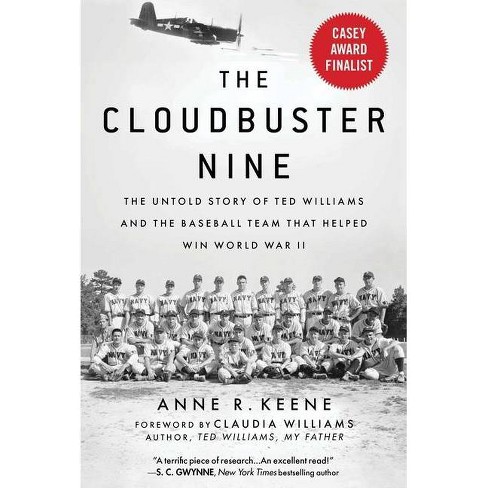 In 1943, while the New York Yankees and St. Louis Cardinals were winning pennants and meeting in that year's World Series, one of the nation's strongest baseball teams practiced on a skinned-out college field in the heart of North Carolina. Ted Williams, Johnny Pesky, and Johnny Sain were among a cadre of fighter-pilot cadets who wore the Cloudbuster Nine baseball jersey at an elite Navy training school at the University of North Carolina at Chapel Hill. In this spirited Field of Dreams-like father-daughter account, author Anne R. Keene opens with a story about her father, Jim Raugh, who suited up as the team batboy and mascot. He got to know his baseball heroes personally, watching players hit the road on cramped, tin-can buses, dazzling factory workers, kids, and service members at dozens of games, including a war-bond exhibition against Babe Ruth's team at Yankee Stadium. Jimmy followed his baseball dreams as a college All-American, but was crushed later in life by a failed major-league bid with the Detroit Tigers. He would have carried this story to his grave had Anne not discovered his scrapbook from a Navy school that shaped America's greatest heroes including George H. W. Bush, Gerald Ford, John Glenn, Paul "Bear" Bryant, and John Wooden. With the help of rare images and insights from World War II baseball veterans such as Dr. Bobby Brown and Eddie Robinson, the story of this remarkable team is brought to life for the first time in The Cloudbuster Nine: The Untold Story of Ted Williams and the Baseball Team That Helped Win World War II.

"Anne Keene's remarkable The Cloudbuster Nine is a terrific piece of research into a forgotten corner of American history--a place where the myths of major league baseball intersect with the myths of the Second World War. It is also a place inhabited by her own father, who becomes the myth that ties it all together. An excellent read!" --S. C. GWYNNE, author of New York Times bestsellers Empire of the Summer Moon and Rebel Yell "My father Ted Williams firmly believed, 'Perfection is attainable if you dare to work hard enough.' I applaud Anne Keene for capturing the untold historical facts of the first group of men who were sent to Chapel Hill for this pathbreaking Naval aviation training program. Coupled with fantastic photos (many of which I had never seen of my father), the stories come to life with amazement in The Cloudbuster Nine." --CLAUDIA WILLIAMS, author, Ted Williams, My Father "In Anne Keene's quest to learn about the "gods of baseball" shadowed by her father as a child at the Pre-Flight School, she uncovers an unexplored world and teaches us about the largely-overlooked athletic training programs of the Second World War. Well-written and impeccably researched, this captivating book offers new insights into the training that forged some of the most fabled members of the "Greatest Generation." The Cloudbuster Nine opens a new window into baseball that would appeal to any military buff, and to readers looking for a compelling family memoir." --BILL NOWLIN, author or editor of more than seventy books on baseball including Ted Williams at War "This is a powerful and true account of some of the greatest players who ever played the game and their naval aviation training that helped win WWII. The journey of the Cloudbusters batboy is another central element of the book that will stir the emotions of anyone who ever dreamed or tried to play in the big leagues. If you are a coach or a parent who aims to motivate the next generation of players, read this book." --MIKE CAPPS, radio broadcaster of the Round Rock Express, Triple-A affiliate of the Texas Rangers and former CNN correspondent "Baseball fans--both avid and casual--will devour this book like a stadium hot dog. Keene's previously untold story of The Cloudbuster Nine, an unlikely team of Navy pilots-in-training, headlined by the great Ted Williams, is a master stroke of research. It is also a highly readable portrait of a time when Americans pulled together for a greater cause. Interwoven in the main narrative about heroes-on-the-diamond is the poignant story of Keene's father, the team batboy, who wanted nothing more than a baseball career and lived a life of bitter regret. Her skills as a storyteller will make the reader taste the Gulden's mustard on their hot dogs and hear the crack of every bat. Riveting!" --KATHRYN SMITH, journalist and author of The Gatekeeper: Missy LeHand, FDR, and the Untold Story of the Partnership That Defined a Presidency "The Cloudbuster Nine brings to life a long-overlooked piece of baseball and World War II history. It's an amazing oral history that tells an important story about how our cultural fabric of baseball was intertwined with the spirit and character of men in uniform during our greatest conflict. It is so well written and researched that I couldn't put it down." --C. PAUL ROGERS III, co-writer of four baseball books, including Lucky Me, My Sixty-Five Years in Baseball with Eddie Robinson "A previously untold tale of a time when playing the game was second to service to one's country. It's also a story of a daughter who comes to fully understand her father's love of that game and his disappointment that he never achieved his dream to remain a part of it. A great read wrapped around two of my loves - aviation and baseball." --Lt. Gen. ROBERT "BOOMER" MILSTEAD JR, USMC (RET.) "An important story enriched by solid research and authorial commitment." --Kirkus Reviews "This book should be read by anyone who enjoys reading about baseball, military stories, World War II history--or even just good stories. It is truly a wonderful piece of work."--LANCE SMITH, The Guy Who Reviews Sports Books blog "Baseball combined with World War II has given us some incredible stories to reflect on. Stories of unimaginable bravery and heroism from citizen/athlete soldiers. Anne Keene's The Cloudbuster Nine adds a new dimension to the story. A beautifully told, family-related adventure about Ted Williams-- one of the game's biggest names--and the Chapel Hill Cloudbusters--one of the game's least-known teams. Written with passion and tension, The Cloudbuster Nine is a must-read for anyone who loves their baseball with a twist of nostalgia." --GARY BEDINGFIELD, British WWII baseball historian who founded Baseball in Wartime network "As a cultural, documentary photographer I can appreciate Anne Keene's account of America's greatest sport and its connection to America's greatest generation. Her book 'illustrates' in meticulously researched prose how major league baseball's best players chose to wear the Jersey of the Navy, as they trained to become elite fighter pilots. These athletes approached their new mission in the same manner as they trained as athletes--with their body and soul. I gained not only new knowledge but a deep respect for these brave heroes." --IRA BLOCK, author of Cuba Loves Baseball: A Photographic Journey

Anne R. Keene has published work in TheNew York Times, the Dallas Morning News, the Raleigh News & Observer, and magazines such as The Saturday Evening Post. A finalist for the prestigious Casey Award, TheCloudbuster Nine was recognized by Newsday magazine as a "Top 12 Baseball Read for the Season." Keene began her career as a speechwriter on Capitol Hill. She is a graduate of the School of Journalism at the University of North Carolina at Chapel Hill who resides in Austin, Texas.
Claudia Williams is the last surviving child of Ted Williams. She penned a loving and forthright memoir, Ted Williams, My Father. As the daughter of a Marine combat pilot in World War II and Korea, and one of the greatest athletes who ever lived, Claudia strives to inspire future generations with examples of the courage and principles that her father exhibited his entire life.
If the item details above aren’t accurate or complete, we want to know about it. Report incorrect product info.