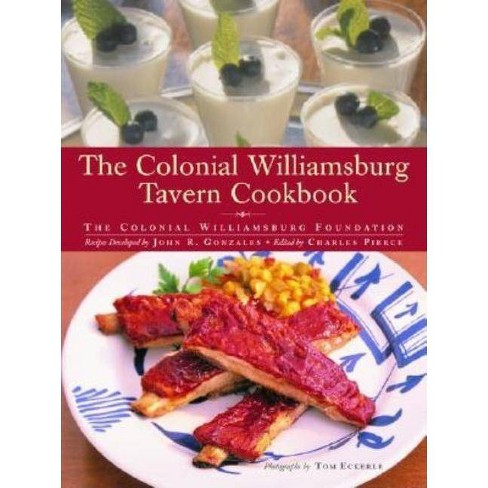 The Colonial Williamsburg Tavern Cookbook Every year, millions of people visit Colonial Williamsburg's re-creation of eighteenth-century America for the ambience, the education, and the unparalleled experience of glimpsing our prerevolutionary past. Williamsburg's fascinating form of time travel encompasses not only the architecture and the artisans, but all the details of our rich cultural heritage, including the food. And The Colonial Williamsburg Tavern Cookbook presents that food, our nation's culinary heritage: from stews and slaws and soups to puddings and pies and pot pies--nearly 200 recipes in all. Focusing on Williamsburg's Southern roots and coastal proximity, the dishes owe their inspiration to the distant past, but their preparations have been tailored for contemporary palates--no need to run out and get some suet in which to cook your mutton over the open hearth. Here are perennial standbys such as Brunswick Stew, Standing Rib Roast with Yorkshire Pudding, Virginia Ham with Brandied Peaches, and Cream of Peanut Soup, as well as Spoon Bread, Lemon Chess Pie, and Mulled Apple Cider. There are also unexpected twists on age-old favorites, such as Oyster Po' Boys with Tarragon Mayonnaise, Oven-Braised Gingered Pot Roast, and Carrot Pudding Spiced with Cardamom. Just as the historic town of Colonial Williamsburg is a singular adventure in understanding our nation's history, so too this cookbook is a unique appreciation of our culinary history. In April 1772, George Washington, writing about one of the taverns in Williamsburg, noted, "Dined at Mrs. Campbells and went to the Play--then to Mrs. Campbells again" --twice in a single week. The hearty fare that George found so enticing is enjoying a profound renaissance, and The Colonial Williamsburg Tavern Cookbook will enable home cooks to relive the great American culinary tradition--the ultimate in comfort food.
If the item details above aren’t accurate or complete, we want to know about it. Report incorrect product info.