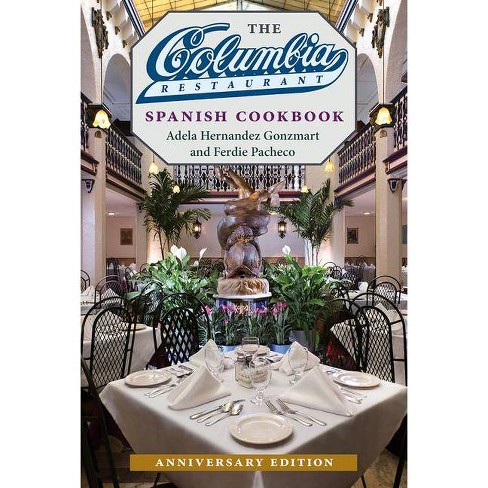 $24.95
new at target¬
no reviews yet
be the first!be the first! ratings
Release Date: coming soon!
Preorder for
Edit zip
Ships by release date with free standard shipping using RedCard
Help us improve this page

In this narrated cookbook, Adela Hernandez Gonzmart and Ferdie Pacheco memorialize their passion for the Columbia, the nation's largest Spanish restaurant and Florida's oldest restaurant. This special 115th anniversary edition of the The Columbia Restaurant Spanish Cookbook features a touching foreword by Andrea Gonzmart Williams, granddaughter of Adela. Adela's affair with food is a family legacy that began in the early twentieth century, when her grandfather Casimiro Hernandez emigrated from Cuba to Tampa. In 1905, Casimiro purchased a small corner cafï¿½, where he started selling soup, sandwiches, and coffee. Out of gratitude to his new country, he named his small cafï¿½ Columbia, after the personification of America in the popular song "Columbia, Gem of the Ocean." Prophetically, he added this motto to his sign: "The Gem of All Spanish Restaurants." Casimiro became known for dishes that the Columbia still serves today--Spanish bean soup, his hearty creation that combines sausage, garbanzo beans, and potatoes in a beef stock; arroz con pollo, a classic chicken and rice dish; an authentic Cuban sandwich; and the "1905" Salad(R), dressed with the family's special blend of fresh garlic, oregano, wine vinegar, lemon juice, and Spanish olive oil. This anniversary edition of The Columbia Restaurant Spanish Cookbook is a history of the elegant family restaurant, which now boasts multiple locations across Florida, and a delicious cookbook of 178 recipes that make them famous. It is also the biography of Adela, the heart of the Columbia, with commentary by Ferdie Pacheco--Muhammad Ali's "Fight Doctor," Ybor City's famous raconteur, and Adela's childhood friend. Adela and Ferdie have since passed, but this book remains a testament to their love of good food and their joy in sharing the aroma, the seasonings, and the glamour of the Columbia.
If the item details above aren’t accurate or complete, we want to know about it. Report incorrect product info.