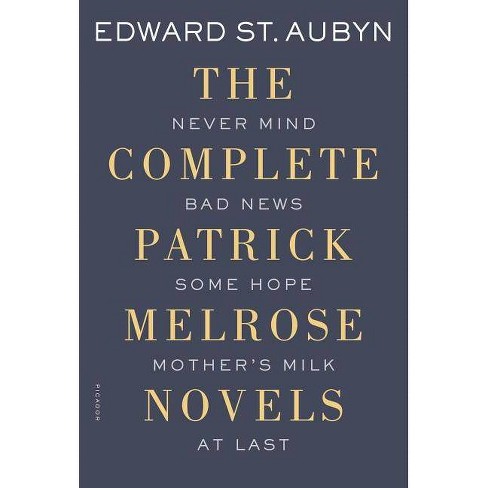 Follows the life of Patrick Melrose, a member of an upper class English family, through his traumatic childhood with an abusive father, drug addiction, fatherhood, and the possible loss of his family home.

NOW COLLECTED INTO ONE VOLUME FOR THE FIRST TIME, ALL FIVE INSTALLMENTS OF EDWARD ST. AUBYN'S CELEBRATED PATRICK MELROSE NOVELS

Edward St. Aubyn has penned one of the most acclaimed series of the decade with the Patrick Melrose Novels. Now you can read all five novels in one volume: Never Mind, Bad News, Mother's Milk, Some Hope, and At Last. By turns harrowing and hilarious, this ambitious novel cycle dissects the English upper class. Edward St. Aubyn offers his reader the often darkly funny and self-loathing world of privilege as we follow Patrick Melrose's story of abuse, addiction, and recovery from the age of five into early middle age. The Patrick Melrose Novels are a memorable tour de force (The New York Times Book Review) by one of the most brilliant English novelists of his generation (Alan Hollinghurst).

"One of the most amazing reading experiences I've had in a decade." --Michael Chabon, Los Angeles Times "One of the best fictional cycles in contemporary fiction." --The Boston Globe

EDWARD ST. AUBYN lives in London with his two children. He is the author of The Patrick Melrose Novels: Never Mind, Bad News, Some Hope, Mothers Milk, and At Last. Mother's Milk was shortlisted for the Man Booker Prize in 2006
If the item details above aren’t accurate or complete, we want to know about it.

With a Butterfly's Wings - by Pilar López Ávila (Hardcover)

If You Want to Fall Asleep - by Jackie Azúa Kramer (Hardcover)

A Clue to the Exit - by Edward St Aubyn (Paperback)

A Clue to the Exit - by Edward St Aubyn (Paperback)