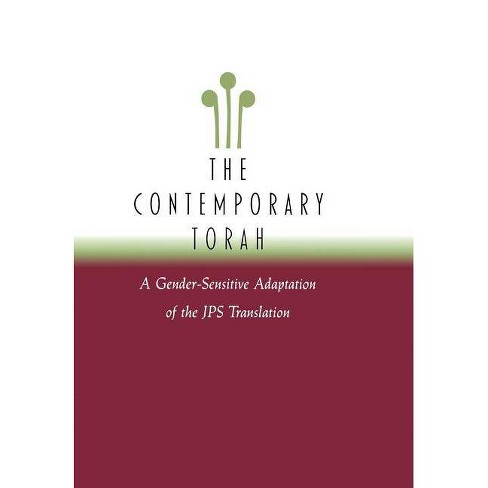 $34.99
no reviews yet
be the first!be the first! ratings
Shipping
Free standard shipping with RedCard
Loading, please wait...
Help us improve this page

Offers readers new perspectives on the role gender plays in Bible translation This adaptation of the JPS translation of the Torah (1962) will appeal to readers who are interested in a historically based picture of social gender roles in the Bible as well as those who have become accustomed to gender-sensitive English in other aspects of their lives. Many contemporary Bible scholars contend that the Bible's original audience understood that the references to God as male simply reflected gendered social roles at the time. However, evidence for this implicit assumption is ambiguous. Accordingly, in preparing this new edition, the editors sought language that was more sensitive to gender nuances, to reflect more accurately the perceptions of the original Bible readers. In places where the ancient audience probably would not have construed gender as pertinent to the text's plain sense, the editors changed words into gender-neutral terms; where gender was probably understood to be at stake, they left the text as originally translated, or even introduced gendered language where none existed before. They made these changes regardless of whether words referred to God, angels, or human beings. For example, the phrase originally translated in the 1962 JPS Torah as "every man as he pleases" has been rendered here "each of us as we please" (Deut. 12:8). Similarly, "man and beast" now reads "human and beast" (Exod. 8:14), since the Hebrew word adam is meant to refer to all human beings, not only to males. Conversely, the phrase "the persons enrolled" has been changed to "the men enrolled" (Num. 26:7), to reflect the fact that only men were counted in census-taking at this time. In most cases, references to God are rendered in gender neutral language. A special case in point: the unpro-nounceable four-letter name for the Divine, the Tetragammaton, is written in unvocalized Hebrew, conveying to the reader that the Name is something totally "other"-beyond our speech and understanding. Readers can choose to substitute for this unpronounceable Name any of the numerous divine names offered by Jewish tradition, as generations have before our time. In some instances, however, male imagery depicting God is preserved because it reflects ancient society's view of gender roles. David Stein's preface provides an explanation of the methodology used, and a table delineates typical ways that God language is handled, with sample verses. Occasional notes applied to the Bible text explain how gender is treated; longer supplementary notes at the end of the volume comment on special topics related to this edition. In preparing this work, the editors undertook a thorough and comprehensive analysis of the Torah's gender ascriptions. The result is a carefully rendered alternative to the traditional JPS translation. David E. S. Stein has served as general editor and revising translator for The Torah: A Modern Commentary, Revised Edition (2005), revising editor and translator for Pathways Through the Bible (JPS, 2002), project manager for Etz Hayim: Torah and Commentary (2001), and managing editor for the JPS Hebrew-English Tanakh (1999). Carol L. Meyers (consulting editor for Genesis and Exodus) is the Mary Grace Wilson Professor of Religion at Duke University in North Carolina. Adele Berlin (consulting editor for Leviticus, Numbers, and Deuteronomy) is the Robert H. Smith Professor of Hebrew Bible at the University of Maryland in College Park. Ellen Frankel is CEO and Editor-in-Chief of The Jewish Publication Society.
If the item details above aren’t accurate or complete, we want to know about it. Report incorrect product info.