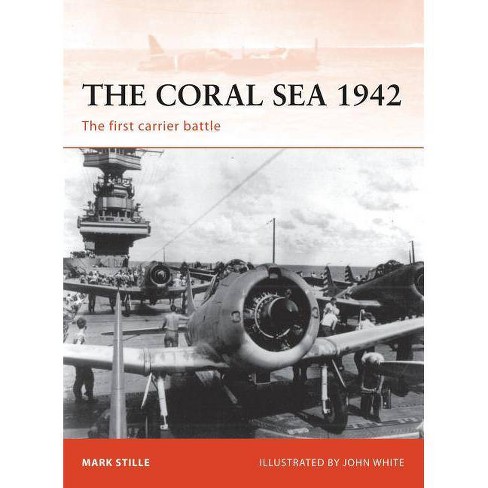 $20.49
MSRP$21.95
no reviews yet
be the first!be the first! ratings
Shipping
Free standard shipping with RedCard
Loading, please wait...
Help us improve this page

"Though many of you have heard of the Coral Sea battle, this book tells the story in a most enlightening and interesting way. It is a book I very much enjoyed reading and is one I can easily recommend to you." --Scott Van Aken, Modeling Madness, www.modelingmadness.com (February 2010)

"The Coral Sea 1942, written by retired USN Cmdr. Mark O. Stille and illustrated by John White's, and tells the story of this important and unique Pacific war battle. The battle of Coral Sea is unique in that it was the first battle in which enemy fleets never came within sight of one another. Instead aircraft launched from carrier decks were sent out to attack the enemy ships with bombs and torpedoes... As with all Osprey titles, the book is well-written and professionally illustrated." --Richard Mataka, mataka.org (December 2009)

"Mark Stille takes a very detailed look at the opposing plans, from the Japanese intent to invade New Guinea and the tactics that the US Navy deployed to frustrate them. We are given very informative biographies of the senior Naval Commanders in question, and also a glimpse into the respective Naval ethos of each country. As a former Naval Officer, Stille is well placed to write about Naval tactics and strategy. And of course, this book contains Osprey's trademark maps and illustrations. One thing that really impresses me is the '3D' maps, showing the height of waves of aircraft as the attacked." --Daly History Blog, dalyhistory.wordpress.com (December 2009)

"As a reviewer, I read a lot of books. Some are good and some less so. Over time, however, I have come to realize that I can always rely on Osprey Publishing to deliver excellent, concise studies of very specific aspects of World War II that are both very well researched and entirely engaging. So it was with a great deal of happy anticipation that I attended a five hour track meet today accompanied only by a cooler of diet cola and Mark Stille's The Coral Sea 1942: The First Carrier Battle. I was not disappointed.
Stille presents America's first strategic victory in a thorough and well-organized fashion. He sets the stage by exploring the condition and constitution of the American and Japanese fleets in the Pacific during the months leading up to the MAy 1942 battle and he explores the personalities of the various commanding officers of the combatants. After providing ample background, Stille takes his readers through the actual battle and the aftermath of the battle, noting the connection between the American success (or more accurately, perhaps, the Japanese failures) in the Battle of the Coral Sea and the later success of the American carrier force in the Battle of Midway." --David Mitchell, World War II Forums, ww2f.com (November 2009)