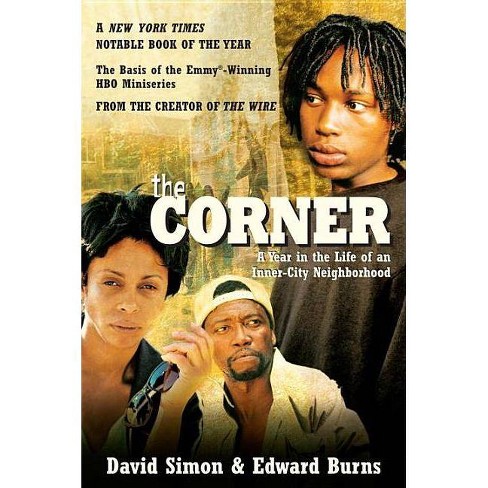 $13.99
MSRP$18.00
no reviews yet
be the first!be the first! ratings
Shipping
Free standard shipping with RedCard
Loading, please wait...
Help us improve this page

West Baltimore, Fayette and Monroe: the corner. On this forgotten intersection, the American dream has crumbled to a nightmare. Here, the full price of the drug culture is being paid — yet, surprisingly, it can also be a place of hope, caring, and love.
This extraordinary book tells the searing true story of one year in the life of an inner-city neighborhood.
Written by David Simon, the award-winning author of "Homicide, " and Edward Burns, a former police detective, it follows a handful of people who must struggle mightily just to survive — let alone escape — the drug market that fuels their world. At the center of the narrative is fifteen-year-old DeAndre McCullough. DeAndre's parents, Gary and Fran, were once poised, against all odds, to pull themselves up and out of West Baltimore. But when they themselves stumble and then succumb to the corner's temptations, DeAndre's future hangs in the balance. Smart and streetwise, he is both drawn to and wary of the drug trade that flourishes beyond his rowhouse steps. Can he rise above his parents' addiction, or will he, too, become a casualty of the corner?
In telling the story of DeAndre and his broken family, Simon and Burns open up the complex world of the corner and its unforgettable characters. It's a place of predators and their prey, of slingers and touts, of stickup boys and shooting gallery nurses, of ambivalent police, helpless users, and innocent bystanders. But it is also, incredibly, a place of fragile hope. Fat Curt, an aging drug tout, remembers the corner as a kinder place, and tries to protect his customers from weak or dangerous product. R.C., a troubled teenager, finds refuge from hischaotic life within the basketball court's magic boundaries. Ella, a longtime resident, runs the recreation center for the corner's children, shielding them as best she can from what lies outside the playground's chain-link fence. Amid so much desperation, decency still flickers, poignantly, across the corner's blasted landscape.
More vividly than any recent book, "The Corner" captures an America of which many of us are only dimly aware. Through the prism of just one desolate crossroads, Simon and Burns offer chilling assessments of why law enforcement policies, moral crusades, and the welfare system have done so little for our inner cities. Deeply moving and unflinchingly real, "The Corner" will forever alter our view of the so-called war on drugs, even as it compels us to look deep into the hearts and minds of all those who live in America's abandoned places.
David Simon is the author of the bestselling "Homicide: A Year on the Killing Streets, " which won an Edgar Award and inspired Barry Levinson's Emmy Award winning television program of the same name. A freelance writer based in Baltimore, he is also a writer and producer for "Homicide" and received the 1994 Writer's Guild for America Award for outstanding script in an episodic television drama.
A teacher in the Baltimore public school system, "Edward Burns" retired after serving twenty years in the city police department. For much of that time, he worked as a detective in the homicide unit.
If the item details above aren’t accurate or complete, we want to know about it. Report incorrect product info.