The Cost of Discipleship - by Dietrich Bonhoeffer (Paperback) 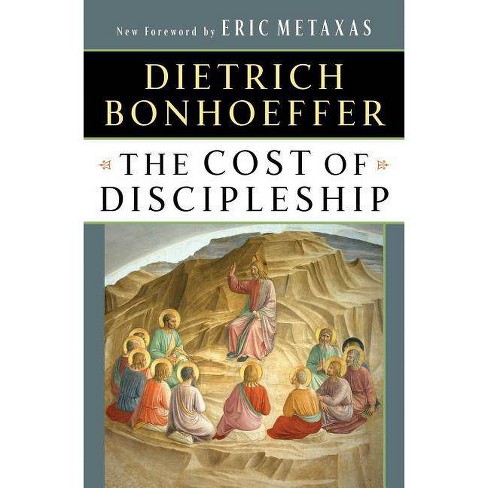 NEW FOREWORD BY ERIC METAXAS Dietrich Bonhoeffer, one of the most important theologians of the twentieth century, illuminates the relationship between ourselves and the teachings of Jesus in this classic book on living as a Christian. What can the call to discipleship, the adherence to the word of Jesus, mean today to the businessman, the soldier, the laborer, or the government worker? What did Jesus mean to say to us? What is his will for us today? Drawing on the Sermon on the Mount, Dietrich Bonhoeffer answers these timeless questions by providing a seminal reading of the dichotomy between cheap grace and costly grace. Cheap grace, Bonhoeffer wrote, is the grace we bestow on ourselves...grace without discipleship....Costly grace is the gospel which must be sought again and again, the girl which must be asked for, the door at which a man must know....It is costly because it costs a man his life, and it is grace because it gives a man the only true life. The Cost of Discipleship is a compelling statement of the demands of sacrifice and ethical consistency from a man whose life and thought were exemplary articulations of a new type of leadership inspired by the Gospel, and imbued with the spirit of Christian humanism and a creative sense of civic duty.

Life Among the Flossenberg martyrs was a remarkable young Lutheran pastor named Dietrich Bonhoeffer, who had joined the underground convinced that it was his duty as a Christian to work for Hitler's defeat. Bonhoeffer was only thirty-nine when he died, but he had already made a monumental contribution to Christian thought, which today has profound and growing significance for both theologian and layman. Bonhoeffer's books are gaining an astonishing popularity in the secutar world....He is admired by people who have read his best-known books, The Cost of Discipleship and Letters and Papers from Prison, as the example of what a modem Christian must be.

Dietrich Bonhoeffer was born in Breslau in 1906. The son of a famous German psychiatrist, he studied in Berlin and New York City. He left the safety of America to return to Germany and continue his public repudiation of the Nazis, which led to his arrest in 1943. Linked to the group of conspirators whose attempted assassination of Hitler failed, he was hanged in April 1945. ERIC METAXAS is an author whose books have been translated into twenty-five languages. The host of a nationally syndicated radio show and the acclaimed conversation series Socrates in the City, he is a prominent cultural commentator whose work has appeared in the New York Times, the New Yorker, The Atlantic, and the Wall Street Journal. He lives with his family in New York City.
If the item details above aren’t accurate or complete, we want to know about it. Report incorrect product info.