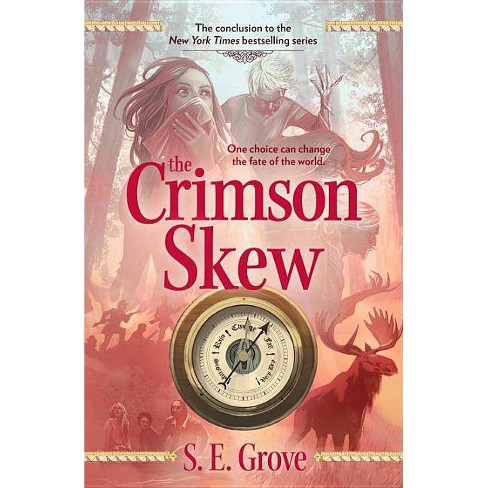 Grove delivers the final volume in the Mapmakers trilogy--a thrilling, inventive blend of political intrigue, adventures in real and mythical landscapes, mapmaking magic, and one girl's desperate quest for her parents.

The thrilling conclusion to S. E. Grove's New York Times-bestselling Mapmakers Trilogy--a historical, fantastical adventure perfect for fans of Philip Pullman! It is late August 1892, and Sophia Tims is coming home from a foreign Age, having risked her life in search of her missing parents. Now she is aboard ship, with a hard-earned, cryptic map that may help her find them at long last. But her homecoming is anything but peaceful. Threatening clouds hang over New Orleans harbor. Sinkholes have been opening in Boston, swallowing parts of the city whole. Rogue weirwinds tear up the Baldlands. Worst of all, New Occident is at war, led by a prime minister who will do anything to expand the country westward. He has blackmailed Sophia's beloved uncle Shadrack into drawing the battle maps that will lead countless men and boys--including Sophia's best friend, Theo--to their deaths. As Sophia puzzles out her next move, Shadrack is peeling back layers of government intrigue, and Theo is bracing himself to fight. A red fog of war is rising, and New Occident's future hangs in the balance . . . * A triumphant conclusion to a prodigious feat of storytelling.--Kirkus Reviews, starred review * A sharply creative, engrossing trilogy . . . Grove's imaginative world building continues to dazzle in this third entry . . . An enormously satisfying wrap-up.--BCCB, starred review

Praise for The Crimson Skew
★ A triumphant conclusion to a prodigious feat of storytelling.--Kirkus Reviews, starred review ★ A sharply creative, engrossing trilogy . . . Grove's imaginative world building continues to dazzle in this third entry . . . Enormously satisfying--BCCB, starred review ★ A fantasy series unlike any other . . . Grove has created a wonderfully unique series with multiple layers for students and teachers to explore.--VOYA, starred review Wildly inventive . . . Readers enamored by Sophia's travels and Grove's uncommonly original fantasy world will be satisfied by this bittersweet conclusion, which leaves plenty of room for further tales.--Booklist Accolades for The Glass Sentence (Book #1)
A New York Times Bestseller
An IndieBound Bestseller
A Kirkus Reviews Best Book of the Year
A Kids' Indie Next Top Ten Book
A Junior Library Guild Selection
A Summer/Fall 2014 Indies Introduce New Voices Selection ★ Brilliant in concept, breathtaking in scale and stellar in its worldbuilding; this is a world never before seen in fiction . . . Wholly original and marvelous beyond compare.--Kirkus Reviews, starred review ★ A thrilling, time-bending debut . . . It's a cracking adventure, and Grove bolsters the action with commentary on xenophobia and government for hire, as well as a fascinating system of map magic.--Publishers Weekly, starred review ★ Stellar . . with impeccable character development and sophisticated, intricate setting details.--BCCB, starred review I loved it! So imaginative!--Nancy Pearl Not since Philip Pullman's The Golden Compass have I seen such an original and compelling world built inside a book.--Megan Whalen Turner, New York Times bestselling author of A Conspiracy of Kings Absolutely marvelous [and] completely original. I love this book.--Nancy Farmer, National Book Award-winning author of The House of the Scorpion
. . . and for The Golden Specific (Book #2)
A Kid's Indie Next Selection
A Junior Library Guild Selection
A New England Book Award Finalist
An iBooks Best of the Month Selection ★ Readers will find a wealth to explore, as the author manages to create memorable characters, an endlessly intriguing world that, even with the provided maps and her uncle's careful explanations, still remains an almost complete mystery, and a plot that merits every single page of this lengthy volume.--BCCB, starred review Brilliantly imagined and full of wonder.--Kirkus Reviews This delicious blend of magic, history, and science will continue to delight fans of intricate world-building and rich storytelling.--School Library Journal

S. E. Grove (segrovebooks.com) is a historian and world traveler. She spends most of her time reading about the early modern Spanish empire, writing about invented empires, and residing in Boston. Follow S. E. Grove on Twitter @segrovebooks.
If the item details above aren’t accurate or complete, we want to know about it.

Ra the Mighty: Cat Detective - by A B Greenfield

The Pumpkin Gospel - by Mary Manz Simon (Board Book)

Crimson Twill: Witch in the City - by Kallie George