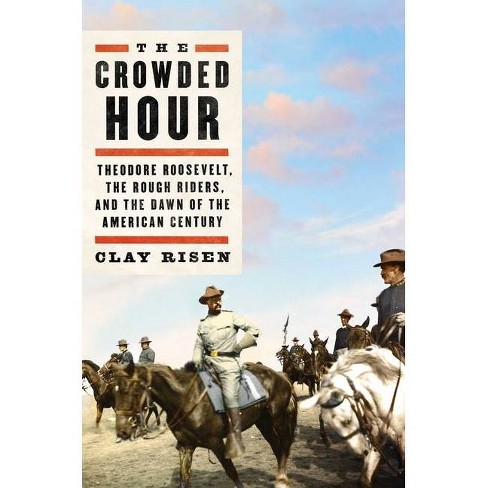 "Fast-paced, carefully researched...Risen is a gifted storyteller who brings context to the chaos of war. The Crowded Hour feels like the best type of war reporting -- told with a clarity that takes nothing away from the horrors of the battlefield."
--The New York Times Book Review "A gripping tale ... [Risen's] more ambitious goal is to show how Roosevelt's volunteer regiment was an important catalyst in the emergence of a new understanding of America's place in the world ...one of the most compelling features of The Crowded Hour is the attention paid to the mï¿½lange of characters who followed [Roosevelt] in battle. Risen depicts the Rough Riders as representatives of modern America, [giving] welcome attention to this cast of characters."
--The Washington Post "Risen clears much of the battlefield smoke to reveal the conditions, events and characters that culminated in TR's supposed charge up San Juan Hill...eminently readable...That TR's men are famous as much for what they symbolize as for what they did makes them no less fascinating to read about."
--The Wall Street Journal "Let the author and historian Clay Risen (who also writes eloquently on bourbon and rye), be your guide to a fascinating and sometimes forgotten part of American history--when Theodore Roosevelt led the volunteer cavalry unit called the Rough Riders in the Spanish-American War and marked a turning point for the country and for the future president."
--Garden and Gun, Best New Books for June 2019 "An engaging, deeply researched account of one the most famous battles in American military history...The battle in Cuba was just one crowded hour in [Roosevelt's] crowded and extraordinary life; this book makes it both a dashing adventure story and a revealing window into our history."
--Tampa Bay Times "In his new book, The Crowded Hour, Clay Risen makes a strong case for the proposition that the Spanish-American War of 1898 was American foreign policy's tipping point for what followed in the 20th and early 21st centuries, with Theodore Roosevelt and his Rough Riders as the change agents ... For those who enjoy stories of bona-fide patriotism, valor, and sacrifice, The Crowded Hour fits the bill."
--Washington Independent Review of Books "A lively exploration of how 'intervene first, ask questions later' became America's foreign policy...Drawing on letters, archival sources, and abundant newspaper articles--many from on-site journalists including Richard Harding Davis, Stephen Crane, and Frank Norris--Risen, deputy op-ed editor at the New York Times, offers a penetrating history of the 'half-baked, poorly executed, unnecessary conflict from which the U.S., nevertheless, emerged victorious... A revelatory history of America's grasp for power."
--Kirkus Reviews, starred "Risen's lively and extensively researched social history illuminates a transformative moment in America's past."
--Publishers Weekly "Risen's power lies in the narrative format, bringing the reader along with the Rough Riders as they begin their path into the American mythos. This book will resonate with longtime historians and first-time readers alike."
--Army Magazine
If the item details above aren’t accurate or complete, we want to know about it. Report incorrect product info.