The Death of Truth - by Michiko Kakutani (Paperback) 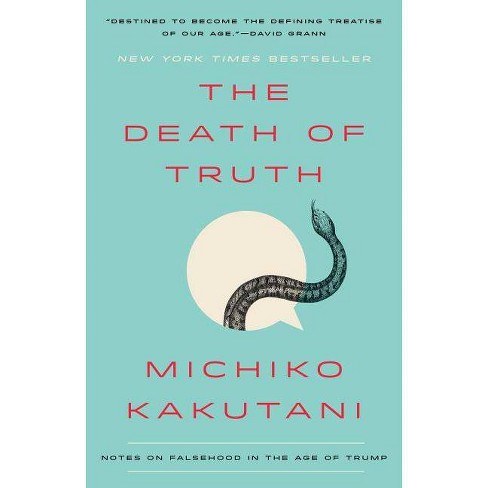 $15.99
MSRP$16.00
no reviews yet
be the first!be the first! ratings
Shipping
Free standard shipping with RedCard
Loading, please wait...
Help us improve this page

"Kakutani has written the first great book of the Trump administration. The Death of Truth is a fiery polemic against the president and should go down as essential reading. In nine exquisitely crafted broadsides, the Pulitzer winner calls upon her vast knowledge of literature, philosophy and politics to serve up a damning state of the union." --Rolling Stone "The Death of Truth is destined to become the defining treatise of our age. Not only does it brilliantly and incisively diagnose the roots of our decaying social and political order; it also shows why we must rescue the truth before it is buried under a regime of lies. Everyone should read this book." --David Grann "This book is essential reading today." --Walter Isaacson "A rich, erudite book. . . . She brilliantly explains the cultural and political forces that brought us to our current sorry condition--a must read." --Fareed Zakaria "Dazzling. . . . Kakutani's slender, fiery new book . . . could have been written only by someone who reads more, and retains more, than most mere mortals." --TIME "Without the truth we will be neither prosperous nor virtuous nor free. This book begins the self-defense of American culture. May it reach a generation that will make narcissism passï¿½ and factuality sexy." --Timothy Snyder

"This is the book I would have written--but only if I had had a brilliant grasp of literature, politics, and history, and the ability to weave them together in a uniquely original way. The Death of Truth goes indelibly to the dark, dark heart of what is ailing our democracy as no recent book has done." --Graydon Carter

"Kakutani's The Death of Truth is politically urgent and intellectually dazzling. She deftly goes behind the daily headlines to reveal the larger forces threatening democracy at home in America, and elsewhere around the globe. The result is a brilliant and fascinating call to arms that anyone who cares about democracy ought to read immediately." --Jane Mayer "A fantastic book of cultural criticism that aims to skewer the falsities in our contemporary world--propagated by social media and political rhetoric--that have turned American culture upside-down." --Esquire "An elegant polemic against Trump, tyranny and lies." --The Times "A pointed and penetrating book. . . . The Death of Truth offers a clear-eyed, eloquent assessment of the current predicament. . . . This book is essential for understanding the corrosive effects of an ongoing, relentless assault on truth." --The San Francisco Chronicle "An intellectually dazzling read." --Entertainment Weekly "Essential. . . . The Death of Truth is Kakutani's first book, and to say it's a doozy would be an understatement." --Bustle "Anyone wanting a concise summary of the death of truth should turn to Michiko Kakutani's eponymous book." --Edward Luce, The Financial Times "Riveting, righteous and relevant." --The Irish Times "A book to which readers could turn for generations to come as an explainer on how the once-unthinkable came to pass." --Longreads
If the item details above aren’t accurate or complete, we want to know about it. Report incorrect product info.