THE DEEJAYS The First 50 Years - by Arnold Passman (Paperback) 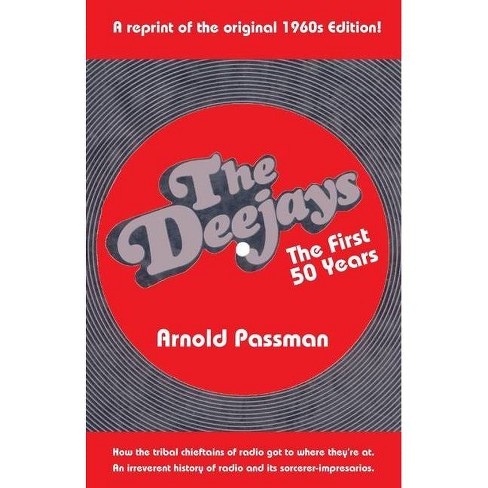 "An electronic extension of the count-less traveling salesmen and medicine men who crisscrossed America during its expansion, the 'faceless' deejay ... the pop propagandist who is the Amer-ican Dream - or a nightmare of a Knight Mercantile."

The Deejays is the first fut story of the tribal chieftains who manipulate-pos-sibly create -popula taste with every spin of their timetable. It is also the history of the countrywide radio stations and the re-cording companies and their role in the extravaganza.

The immense growth of radio in the United States since the Depression can be traced directly through the evolution of the deeiay who played records, interspersed with announcements of time, weather, and news, and most importantly peddled merchandise. In the beginning, they often spieled for dubious patent medicines or cut-rate clothing and furniture stores. Later, as national advertisers saw the possibilities for big profits from a small in-vestment in air time, they began buying into the recorded music programs on the air nearly twenty-four hours a day from radio stations across country.

At first, stations were reluctant to shell out cash just to play records. Recording firms, band leaders, and top singers feared an adverse effect on sales. The opposite happened, with every promoter eventually battling to get his discs released first on top shows, paving the way for huge incomes for major deejays, and the payola scandals that rocked the country late in 1959 when adoring fans saw many of their idols toppled in disgrace.

The individual stories of the deejays are fascinating. Many of the diskers are quoted directly, talking frankly and irreverently about their jobs and bosses, tunes and trends, frustrations and triumph. Just how powerful they were, especially in their influence on younger listeners, is a question Arnold Passman explores in depth. Look-ing to the future, he concludes that the day of the mass audience is over and that, increasingly, broadcasters will follow the read of such listener-supportecl stations as KPFK, Los Angeles; KPFA, Berkeley; and WBAI, New York, in appealing to a selective audience through true community service programming.