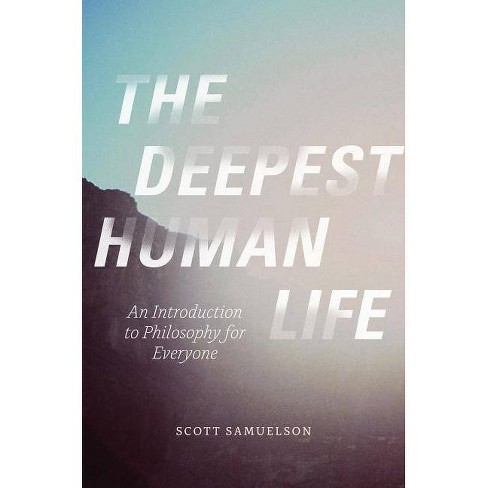 Winner of the 2015 Hiett Prize in the Humanities. Sometimes it seems like you need a PhD just to open a book of philosophy. We leave philosophical matters to the philosophers in the same way that we leave science to scientists. Scott Samuelson thinks this is tragic, for our lives as well as for philosophy. In The Deepest Human Life he takes philosophy back from the specialists and restores it to its proper place at the center of our humanity, rediscovering it as our most profound effort toward understanding, as a way of life that anyone can live. Exploring the works of some of history's most important thinkers in the context of the everyday struggles of his students, he guides us through the most vexing quandaries of our existence--and shows just how enriching the examined life can be.
Samuelson begins at the beginning: with Socrates, working his most famous assertion--that wisdom is knowing that one knows nothing--into a method, a way of approaching our greatest mysteries. From there he springboards into a rich history of philosophy and the ways its journey is encoded in our own quests for meaning. He ruminates on Epicurus against the sonic backdrop of crickets and restaurant goers in Iowa City. He follows the Stoics into the cell where James Stockdale spent seven years as a prisoner of war. He spins with al-Ghazali first in doubt, then in the ecstasy of the divine. And he gets the philosophy education of his life when one of his students, who authorized a risky surgery for her son that inadvertently led to his death, asks with tears in her eyes if Kant was right, if it really is the motive that matters and not the consequences. Through heartbreaking stories, humanizing biographies, accessible theory, and evocative interludes like "On Wine and Bicycles" or "On Zombies and Superheroes," he invests philosophy with the personal and vice versa. The result is a book that is at once a primer and a reassurance--that the most important questions endure, coming to life in each of us.
If the item details above aren’t accurate or complete, we want to know about it. Report incorrect product info.