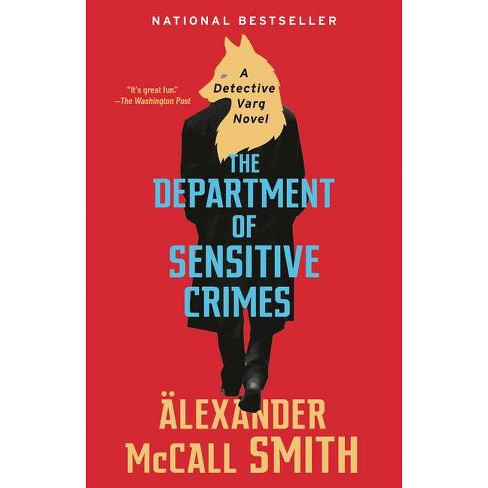 "The detectives who work in Malmo Police's Department of Sensitive Crimes take their job very seriously. The lead detective, Ulf Varg, prioritizes his cases above even his dog's mental health. Then there are detectives Anna Bengsdotter, who keeps her relationship with Varg professional even as she realizes she's developing feelings for him . . . or at least for his car, and Carl Holgersson, first to arrive in the morning and last to leave, who would never read his colleagues' personal correspondence--unless it could help solve a crime, of course. Finally, there's Erik Nykvist, who peppers conversations with anecdotes about fly fishing. Along with an opinionated local police officer named Blomquist, the Department of Sensitive Crimes takes on three extremely strange cases. First, the detectives investigate how and why a local business owner was stabbed . . . in the back of the knee. Next, a young woman's imaginary boyfriend goes missing. And, in the final investigation, Varg must determine whether nocturnal visitations at a local spa have a supernatural element. Using his renowned wit and warmth, Alexander McCall Smith brings a unique perspective on Scandinavian crime. Equal parts hilarious and heartening, The Department of Sensitive Crimes is a tour de farce from a literary master"--

In the Swedish criminal justice system, certain cases are considered especially strange and difficult, in Malmö, the dedicated detectives who investigate these crimes are members of an elite squad known as the Sensitive Crimes Division. These are their stories. The first case: the small matter of a man stabbed in the back of the knee. Who would perpetrate such a crime and why? Next: a young woman's imaginary boyfriend goes missing. But how on earth do you search for someone who doesn't exist? And in the final investigation: eerie secrets that are revealed under a full moon may not seem so supernatural in the light of day. No case is too unusual, too complicated, or too, well insignificant for this squad to solve. The team: Ulf "the Wolf" Varg, the top dog, thoughtful and diligent; Anna Bengsdotter, who's in love with Varg's car (and possibly Varg too); Carl Holgersson, who likes nothing more than filling out paperwork; and Erik Nykvist, who is deeply committed to fly fishing. With the help of a rather verbose local police officer, this crack team gets to the bottom of cases other detectives can't or won't bother to handle. Equal parts hilarious and heartening, The Department of Sensitive Crimes is a tour de farce from a true master.

"Tucking into a brand-new mystery series by Alexander McCall Smith is a lazy-dazy pleasure . . . What binds the stories are the tight relationships of Varg and his colleagues and their hilariously human crotchets."
--Marilyn Stasio, The New York Times Book Review

"Depend on the author of the "No. 1 Ladies Detective Agency" and "44 Scotland Street" novels to make even a Nordic Noir mystery delightful."
--Tom Beer, Newsday "McCall Smith . . . extends his gift for comic situations and insightful commentary to a projected series set in Sweden . . . Detective Varg promises to be a complex series character, and the department itself looks certain to deliver more oddball yet poignant cases."
--Booklist (starred review)

"The celebrated Scottish storyteller has turned his pen to Scandi-crime, setting his latest series with Detective Ulf 'The Wolf' Varg heading up a department of singular characters in the Swedish city of Malmo. It's as if Fox Mulder, Lisbeth Salander's maiden aunt, and Kurt Wallander collaborated on a new unit, and it's great fun."
--Bethanne Patrick, The Washington Post (10 Books to Read in April) "The author of more than 80 books has not lost his literary touch, but his latest account of the doings at Sweden's Department of Sensitive Crimes hits a new high of hilarity."
--Muriel Dobbin, The Washington Times

"With astonishing heart and mind, Alexander McCall Smith launches a bold and original new series. With The Department of Sensitive Crimes, he invents a new and compassionate genre: Scandi Blanc. I didn't know whether to laugh or cry, but in the end I did both. I'm already looking forward to the next one."
--Alan Bradley, best-selling author of the Flavia de Luce series "Appealing . . . The interpersonal relationships McCall Smith so sensitively portrays and the ethical issues he raises matter far more than the sleuthing. Fans of gentle mysteries will look forward to the sequel."
--Publishers Weekly

ALEXANDER McCALL SMITH is the author of the No. 1 Ladies' Detective Agency novels and of a number of other series and stand-alone books. His works have been translated into more than forty languages and have been best sellers throughout the world. He lives in Scotland.
If the item details above aren’t accurate or complete, we want to know about it. Report incorrect product info.