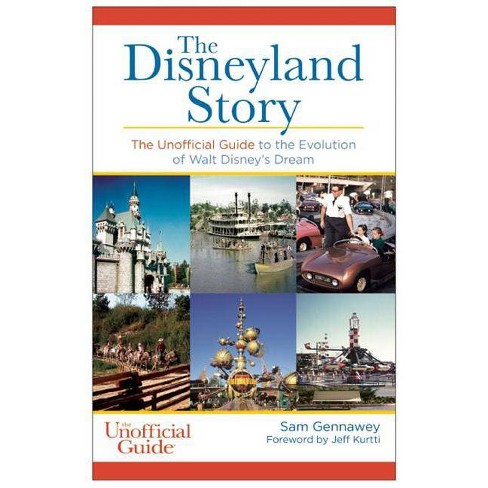 "With hand scribblings from Walt Disney and original drawings of the theme park, Gennawey lays out a comprehensive description of the life and history of Disneyland."
--Rachel Young, Pasadena Now "The book [The Disneyland Story] relies heavily on quotations, which adds to its credibility and readability. Many of the quotations, but not all of them, include endnote numbers. So the book has an answer for you if you wonder, Where and when did that person say or write that?"
--Werner Weiss, Yesterland.com ..".Gennawey's book is "unofficial" in its content (but it's not a travel guide). There's nothing [that] should embarrass anyone, but it includes people and stories that you would not read about in Disney publications. For example, C.V. Wood, Disneyland's first general manager, has been all but erased from official Disney history. There are great descriptions of attractions that were announced but never built. And the story of how the land was chosen and acquired for Disneyland has never been published in this detail."
--Werner Weiss, Yesterland.com "Don't let the title "unofficial" deter you in the least. This work exceeds anything Disney has ever formally put out. For that matter, in its total form it may exceed everything Disney has put out. There's just so much."
--J. Jeff Kober, DisneyatWork.com "The great thing about this book [The Disneyland Story] is the mix of technical details about things like specs on the locomotive engines, Autopia cars, and Monorail designs, blended with anecdotal stories and quotes from many different sources, so there is something for everyone here. The book is peppered with "tips" and trivia along the way as well."
--Susie Prendergast, The Mouse Castle "The book [The Disneyland Story] is incredibly exhaustive and takes us through Disneyland's history through the growth of the beloved park. It's laid out in large blocks of years that showcase the development of the park through major attractions and shows. What's fascinating is that Sam was able to delve into the political machinations with the city councils of Burbank and Anaheim to show how Walt's ideas were stymied as well as passed unanimously. The larger civic and community roles that Disneyland has played are usually not recounted, which makes this book so valuable. Kudos to Sam for including an almost rapacious bibliography and for having the decency to cite his references. Not many authors do that. This one is a must have for Disneyland fans!"
--George Taylor, MiceChat.com
If the item details above aren’t accurate or complete, we want to know about it. Report incorrect product info.