The Division of Light and Power - by Dennis Kucinich (Paperback) 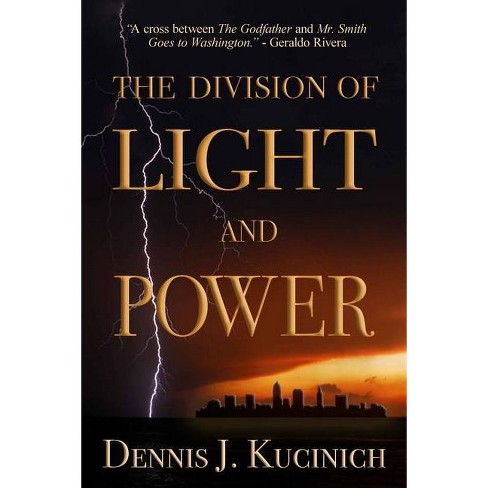 The Division of Light and Power is the true story of an American mayor. They tried to buy him, and when he couldn't be bought, they tried to kill him. It's Dennis Kucinich's story, but it may be your city's story, too.

The Division of Light and Power is the thoroughly documented, true story of one courageous American mayor who fought, and beat, a utility monopoly in an epic battle which involved corporate espionage and sabotage, bank co-conspirators, extortion, political corruption, organized crime, mob-directed assassination attempts, congressional investigations, and media cover-ups.

The "powers that be" tried to buy him, and when he couldn't be bought, they tried to kill him. When that failed, the utility's bank gave him a choice: Privatize the city's electric system or the city would be thrown into default. The mayor said "no" to extortion, never gave in and saved over a billion dollars in assets for his city and its people.

Meet Mayor Dennis Kucinich of Cleveland, who fought to give power to the people. Battling his way up from the streets of the city, he and his family lived in twenty-one different places by the time he was seventeen, including a couple of cars. By the age of thirty-one, as America's youngest big-city mayor, his stand to protect Cleveland's Muny Light against a utility monopoly and its banking partner drew international attention and praise as "The outstanding public official in America," an award presented by Bob Hope.

This is Mayor Dennis Kucinich's story, but if you want to know why your utility rates are so high, it may be your city's story, too.

PULITZER PRIZE WINNER - SEYMOUR M. HERSCH"This is a Rocky story about a kid from the wrong side of the tracks who, as a young mayor, took on the power structure of one of America's most corrupt cities and won the battle."
PULITZER PRIZE WINNER - CHRIS HEDGES"The Division of Light and Power, like Robert Caro's The Power Broker: Robert Moses and the Fall of New York, is a gripping, moving and lucidly written account of the hidden mechanisms of corporate power in the United States and what happens when these corporate interests are challenged. It is essential reading, especially as we face an intensified corporate assault, done in the name of fiscal necessity, to seize total control of all public assets. As Dennis Kucinich warns, this assault is more than the seizure of public assets for private gain. These corporate forces, which function as a shadow government in Washington and cities across the country, now threaten to extinguish our anemic democracy. The Division of Light and Power is destined to become a classic text for those who seek to understand what took place to the United States in the late 20th and early 21st centuries."

"The epic struggle of a youthful mayor against a predatory utility company is a real-life municipal thriller. Dennis Kucinich's tale of political violence and intrigue is a cross between The Godfather and Mr. Smith Goes to Washington. He took on the fat cats on behalf of the City of Cleveland. He stared them down and won one for the good guys." - Geraldo Rivera

"The Division of Light and Power offers the inside story of historic events, while also implicitly taking us to the real time of the present; there is no more relevant book to read in 2021. Dennis Kucinich has written a vivid page-turner that's a political barn-burner. It reads like a novel, but it's not based on a true story -- it is a true story -- with meticulous devotion to facts, real political paradigms, and the human heart.

"A real life, David vs. Goliath story, of one man taking on powerful corporations and political interests... An engaging and powerful read that today is more relevant than ever."

Curiosity: The Story of a Mars Rover - by Markus Motum (Hardcover)

A Light in the Attic - by Shel Silverstein (Hardcover)

You Must Know the Times, Answers to 25 Essential Questions On End Time Prophecy - by Dennis James Woods (Paperback)